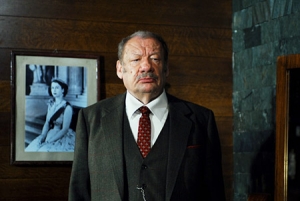 Wolfgang Völz, born August 16, 1930, in Danzig-Langfuhr, initially worked as a baker but then took acting lessons and made his stage debut in 1950 at Landestheater Hannover in a minor part in Schiller's "Don Carlos". Völz subsequently worked at theatres in Vienna, Berlin, and Hamburg. In 1954, Völz made his movie debut in a tiny role in Rudolf Jugert's comedy "Ihre große Prüfung" ("The Big Test"). At the same time, Völz was a cast member of Berlin's famous satire group "Die Stachelschweine" and performed live on stage. Distinguished performances in supporting parts in films as diverse as "Kitty und die große Welt" ("Kitty and the Great Big World", 1956), "Die 1000 Augen des Dr. Mabuse" ("The Thousand Eyes of Dr. Mabuse", 1960), and "Emil und die Detektive" (1964) made Völz one of Germany's most versatile and popular actors.

Besides his appearances in Edgar Wallace classics like "Der grüne Bogenschütze" ("The Green Archer", 1961), Völz became most popular for his part as Mario de Monti in the iconic science-fiction series "Raumpatrouille Orion" ("Space Patrol", 1966). From the 1960s on, Völz became a household name to German TV viewers. His grumpy but amiable manners and striking appearance were seen in series like "Stahlnetz", "Der Kommissar", "Meister Eder und sein Pumuckl" or "Tatort" which made Völz one of the busiest German actors. His filmography includes more than 150 movies and 600 TV productions.

Furthermore, Völz has had a longtime career as a dubbing voice. He was the German voice of actors such as Walter Matthau or Ernest Borgnine and with his voice shaped the popular "Käpt'n Blaubär" character. In 2004, Völz starred as Sir John in the Edgar Wallace parody "Der Wixxer", a tongue-in-cheek reference to his numerous appearances in the original Edgar Wallace films. Völz also continued this part in the film's sequel "Neues vom Wixxer".

After this, he graces the screen only a few other times, yet he still lends his distinctive voice repeatedly for audiobooks or video games and works as a speaker for films such as "Das doppelte Lottchen" ("Two Times Lotte", 2007), "Urmel voll in Fahrt" ("Impy's Wonderland", 2008) and finally - as the voice of God - the comedy "Der Gründer," which premieres in 2012.

During his career Wolfgang Völz receives various awards. In addition to the Federal Cross of Merit with Ribbon (1991), he is honored with the Verdienstorden des Landes Berlin in 2002 and the Ohrkanus-Hörbuch- und Hörspielpreis for his life's work in 2011.