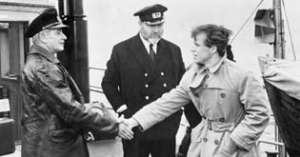 
The film version of Sigfried Lenz′ novella of the same name was to become the last film of screenwriter Curt Siodmak. The movie tells the story of the indomitable captain Freytag who together with his son gives shelter to three castaways. He realizes too late, that he actually helped three gangsters on the run. Dr. Caspary, leader and spokesman of the gang, demands to alter the position of his lightship, which Freytag′s sense of duty doesn′t allow him to do. Some members of his crew are determined to overpower the gangsters, but Freytag warns them against the use of violence. He wants to avoid any bloodshed even though his son might regard him as a coward. When Caspary tries to win the crew over through bribing and threatening, the situation on board gets out of control.