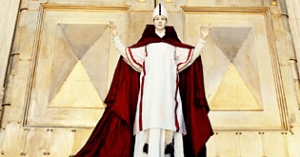 "Die Päpstin" is an elaborate film version of the best-selling novel of the same name by Donna Woolfolk Cross. In the year 814, Johanna′s life seems heteronomous and predetermined: she works hard, gives birth to her children, and is probably going to die prematurely. But Johanna revolts against her strict father and against the rules of the church and the society she is living in. She attends the cathedral school in Dorstadt where she meets Count Gerold, a nobleman at the bishop′s court. Their friendship turns to love. When Gerold goes to war, Johanna remembers her provision. But she will not be able to accomplish her purpose as a woman. Thus, Johanna takes a momentous decision: disguised as man, she joins the Benedictine monastery in Fulda as Brother Johannes. Soon, she climbs up the clerical hierarchy – and is finally elected pope as the successor of Pope Sergius.