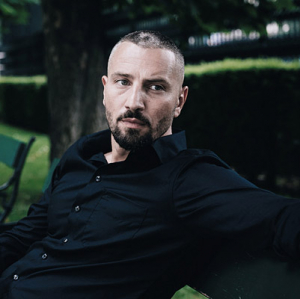 Murathan Muslu, born on November 7, 1981 in Vienna, Austria, began his artistic career as a musician: under the stage name Aqil, he founded the hip-hop group Sua Kaan in 1996, at the age of 15, together with two friends. Originally intended as a hobby, Sua Kaan's music became more professional over time. In early 2010, the band released its first (and so far last) album, "Aus eigener Kraft," which landed the band in the charts and was nominated for the prestigious Amadeus Austrian Music Award.

Also in 2010, Sua Kaan realized the official music video for Hüseyin Tabak's film "Kick Off", an award-winning documentary about the Austrian national homeless football team on their way to the Homeless World Cup in December 2008 in Melbourne, Australia. The music video was directed by Umut Dağ - who also gave Muslu his first feature film role the following year: In the 40-minute film "Papa" (AT 2011), he played a rapper who must face his role as a single father. The multi-award-winning film marked the beginning of a regular collaboration between Dağ and Muslu (who did not pursue his rap career).

Muslu, for example, played a leading role in Dağ's feature-length debut "Kuma" (AT 2012), which opened the Panorama section at the Berlinale 2012. The film tells the story of a young Austrian-Turk who acts as a sham husband to his own father's second wife - and has to hide his own homosexuality. The intense drama screened at numerous festivals and won several awards. Lighter fare was Hüseyin Tabak's children's film "Das Pferd auf dem Balkon" ("The Horse on the Balcony",AT 2012), with Muslu in a supporting role as a clumsy crook. In 2013, he was seen in a supporting role in Jan Bonny's highly acclaimed TV movie "Der Tod macht Engel aus uns allen" from the "Polizeiruf 110" series, followed by a part as a Bulgarian pimp in "Angezählt" from the "Tatort" series.

Muslu had a major success with the lead role in Umut Dağ's "Risse im Beton" ("Cracks in Concrete", AT 2014): For his portrayal of an ex-convict who wants to save his son from getting involved in drug-related crime, he was awarded Best Actor at the Filmkunstfest Mecklenburg-Vorpommern 2014, at the Diagonale in Graz 2015 and at the Austrian Film Awards 2015.

He had a central role in Christian Alvart's TV movies "Kopfgeld" (2014), "Der große Schmerz" (2016) from the "Tatort" series and their feature film spin-off "Tschiller: Off Duty" (2016), as a neighborhood bigwig and informant for Til Schweiger's main character, detective inspector Nick Tschiller. Muslu was also part of the ensemble of Josef Hader's social satire "Wilde Maus" ("Wild Mouse", 2017) and played the male lead in Sabine Derflinger's romantic comedy "Anna Fucking Molnar" (AT 2017), which earned him a Romy nomination for Most Popular Actor.

Once again directed by Umut Dağ, Muslu portrayed a Muslim family father in the TV drama "Das deutsche Kind" (2017), who is supposed to take care of his deceased (Christian) neighbor's little daughter according to her will - much to the displeasure of the child's grandmother. Muslu received a nomination for the Bavarian Television Award for this role. Dağ also cast him in the third and (final) fourth season of the series "CopStories" (AT 2018-2019) as a new member of the Vienna-Ottakring crime squad. In parallel, Muslu has been playing a prosecutor in the Austrian series "Schnell ermittelt" ("Fast Forward") since 2017.

Muslu was also a sought-after actor in ambitious series projects. For example, in the Sky miniseries "8 Tage" ("8 Days", 2019, directed by Stefan Ruzowitzky, Michael Krummenacher), he played a German-Turkish police officer who wants to maintain his moral integrity even in the face of the end of the world. The Netflix series "Skylines" (2019), set in Frankfurt, featured him in a leading role as a rapper and music producer, a character based on the rapper Haftbefehl from Offenbach. In addition, he appeared in the TV thrillers "Es lebe der Tod" (2018) and "Der gute Bulle - Friss oder stirb" (2019) directed by Lars Becker.

Murathan Muslu had big screen roles as an Islamist hijacker in the terrorism thriller "7500" (DE/AT 2019) and as the secret lover of a single woman (Nina Hoss) in the mother-daughter psychodrama "Pelikanblut" ("Pelican Blood", DE/BG 2019), which was screened at the Venice, Toronto and Hamburg film festivals, among others. Alongside Liv Lisa Fries and Max von der Groeben, he was in front of the camera at the end of 2019 for Stefan Rutzowitzky's "Hinterland" (theatrical release in fall 2021), a thriller set in Vienna in the early 1920s about a prisoner of war (Muslu) who returns to his homeland after World War I and is confronted with a gruesome series of murders.