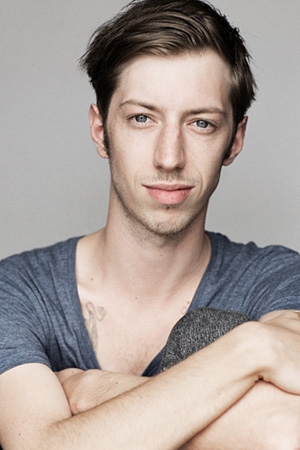 Maximilian Mauff, born in Berlin on July 3, 1987, already appeared on stage with various Berlin theatre groups as a child and took part in short films by Aelrun Goette, who was still studying directing at the time. He made his debut on the big screen with a leading role in Kai Wessel's "Das Jahr der ersten Küsse" ("The Year of the First Kiss", 2002), in which he played the main character in the flashbacks at a young age. In the following years Mauff had smaller and larger supporting roles in numerous cinema and television productions. In "Erbsen auf halb 6" ("Peas at 5:30", 2004) he portrayed a pupil, in "Kombat Sechzehn" ("Combat Sixteen", 2005) a member of a right-wing extremist youth gang. He belonged to the large ensemble of the episode film "Weltverbesserungsmaßnahmen" ("Measures to Better the World", 2005) and played a smaller role in the youth drama "Was ich von ihr weiß" (2006). On television Max Mauff had guest roles in several "Tatort" episodes and in series such as "Wolff's Revier" and "Der Kriminalist". In the TV thriller "Verschleppt - Kein Weg zurück" ("6 Weeks of Fear") he played a supporting role as a computer whiz who helps his teacher find his missing girlfriend; in the GDR drama "Die Todesautomatik" (2007, TV), about the escape helper Michael Gartenschläger and the self-shot facilities at the inner-German border, he appeared as a later Stasi agent in his rebellious youth years.

Directed by Dennis Gansel, Mauff starred as a teenager from a wealthy family in the award-winning film adaptation of the youth book "Die Welle" ("The Wave", 2008), who reluctantly joins a fascist student movement. Continuing in 2008 he played a young villager in Eastern Europe whose love is put to the test by a "women's strike" in Veit Helmer's "Absurdistan". For this role he was awarded the Actor Prize at the Boulogne-Billancourt Film Festival in Paris.

After small appearances in "The Reader" (USA/D 2008), "Berlin Calling" (2008) and "Männerherzen" ("Men in the City", 2009), Mauff had a supporting role in the social satire "Mensch Kotschie" (2009) as the son of a father shaken by a midlife crisis and job depression. From 2011 to 2012 he played the recurring role of apprentice Jonas in the comedy series "Stromberg". He then starred in a central role in Franziska Schlotterer's highly acclaimed and award-winning drama "Ende der Schonzeit" ("Closed Season", D/IL 2012) as a German student looking for his biological father in an Israeli kibbutz in 1970. In "Love Israel" (D/IL 2013) Mauff also played a German in Israel, but this time as a volunteer at a social institution.

Mauff received much praise from critics and the young actor prize at the 2013 Max Ophüls Film Festival for his performance in "In der Überzahl" ("Comrades of Fortune", 2012): In the intimate drama, he impressed the audience with his performance as a pupil who, after going on a shooting, takes an unsuspecting car driver hostage. For "Stromberg - Der Film" (2014) he reprised the role of the series character Jonas. Mauff took on a leading role in "Patong Girl" (2014), as a German teenager who falls in love with a local during a family holiday in Thailand.

Sebastian Schipper's "Victoria" premiered at the Berlinale 2015 competition. Max Mauff had a leading role in it as of the four young men who want to rob a bank. The film was favoured by most critics and received several awards at the Berlinale. At the German Film Award 2015, "Victoria" received six awards, which was more than any other film at the ceremony.

In the American mini-series "Sense8" (2015), directed by Tom Tykwer, Mauff starred in a leading role as the best friend and accomplice of a safe cracker (Max Riemelt). In the same year he played in Steven Spielberg's "Bridge of Spies" (US/DE 2015) as the leftist secretary of a GDR functionary (Burghart Klaußner). Similarily striking was his role in the six-part Grimme Award winning mystery series "Weinberg" (2015), in which he played the foster son of a strictly religious family who arouses the suspicion of the villagers with his rebellious band called "Angry Fucks".

Max Mauff starred in a leading role in the science fiction mystery film "Wir sind die Flut" ("We Are the Tide", 2016). The film tells the story of an ambitious physics student (Mauff), who travels with a colleague on his own into a military restricted area to investigate a mysterious missing part of the ocean along the coast.