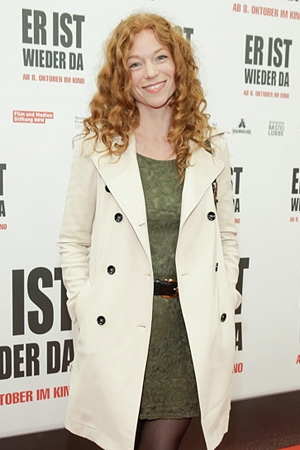 Marleen Lohse at the premiere of "Er ist wieder da" in Berlin on October 6, 2015

Marleen Lohse, born 1984 in Soltau, made her acting debut at the age of 13 with a memorable guest role in the television series "Neues vom Süderhof". Further TV appearances followed, among them a leading role in the successful children's series "Die Kinder vom Alstertal" (1998-2004). She continued her acting career after finishing school and played a leading role in the comedy "Küssen verboten, baggern erlaubt" (2003).

From 2006 to 2009 Lohse studied acting at the Hochschule für Film und Fernsehen Konrad Wolf in Potsdam and appeared in a series of highly acclaimed theatre productions. During her studies she took part in television productions such as the adaptaion of Frank Schätzing's novel "Mordshunger" (2008) as well as in several episodes of the crime series "SOKO Leipzig".

Lohse also made her debut on the big screen during her studies with a small role in Tobi Baumann's comedy "Vollidiot" ("Complete Idiot", 2007). Subsequently, she had further supporting roles in "Maria, ihm schmeckt's nicht! ("Maria, He Doesn′t Like It!", 2009) and "Résiste - Aufstand der Praktikanten" ("Resist! – Rebellion of the Interns", 2009), before she was cast in her first leading role on the big screen in 2011: In the film adaptation "Kein Sex ist auch keine Lösung" Marleen Lohse played an art director in an advertising agency that shakes the self-conception of a notorious womanizer. Lohse also returned to the theatre stage in 2011 with a leading role in a production of Ibsen's "An Enemy of the People".

Over the next few years Lohse was seen on the big screen mainly in supporting roles in films as varied as the thriller "Zimmer 205" ("205: Room of Fear", 2012), the road movie "Frau Ella" (2013), the relationship comedy "Seitenwechsel" (2016) and the satire "Happy Burnout" (2017). On television she mainly played guest roles in various series and crime series such as "SOKO Stuttgart" and "Der Staatsanwalt". From 2014 she took on a leading role in the crime series "Nord bei Nordwest" as an employee in the veterinary practice of the main character. Lohse also had a leading role in Marco Kreuzpaintner's psychological thriller "Sanft schläft der Tod" ("Your Children", 2016, TV) as well as leading roles in Lars Becker's television play "Der mit dem Schlag" (2016) and Gregor Schnitzler's three-part family chronicle "Bella Germania" (2018), as a friend of a young German Italian.

Marleen Lohse played another leading role on the big screen under the direction of Erik Schmitt, with whom she had already made four short films since 2013: In his award-winning feature film debut "Cleo" (2019) she impersonated a reclusive Berlin woman who embarks on a treasure hunt across Berlin with a young adventurer (Jeremy Mockridge).