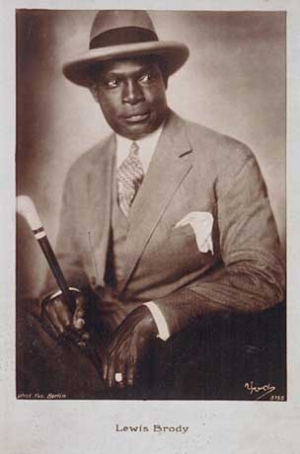 Autographed picture, made by the Avantgarde-Fotographer Yva

Ludwig M'bebe Mpessa, known professionally as Louis Brody, was born in Duala, Cameroon, then a German colony, on February 15, 1892. How he came to Germany is unclear. Brody belonged to the few black German actors who were individually recognized as singers, musicians, wrestlers and dancers during the German Empire.

In 1915, at the age of 23, Brody played his first role in the film "Das Gesetz der Mine" directed by Joe May, which is considered lost today. In it, he portrayed a "giant" black man with racist connotations who kills a white man. In his subsequent films, such as "Genuine" (1920), in which he played a comparatively large supporting role, Brody was again cast in the racially marked part of the "giant" or "demonic" black man. Among the best-known films in which he appeared during the Weimar Republic were the Peter Voss series by Georg Jacoby, in which he took on the recurring role of Bill Burns, "Der müde Tod" ("Destiny", 1921), and the two parts of "Das indische Grabmal" (1921). In the late 1920s, Brody adopted the artist name "Brody-Alcolson," a tribute to the famous Jewish-American actor Al Jolson, who had impersonated a black man in "The Jazz Singer" (1927) as a blackface performance.

The National Socialist regime in Germany did not end Brody's acting career. Between 1933 and 1945, he appeared in at least 23 films. For the then new genre of colonial films, black actors were needed, and some of whom were highly paid, despite the racial discrimination. Although Brody was one of the few black people who were granted speaking roles, he always played subordinate characters, such as the duke's servant in Veit Harlan's anti-Semitic hate film "Jud Süß" ("Jew Süss", 1940). His talent and great knowledge of languages secured his livelihood during the war and possibly saved his life. Brody played his best-known roles as the evil chief Lobenguela in the nationalist propaganda film "Ohm Krüger" ("Uncle Kruger", 1941), in "Vom Schicksal verweht" (1942) and alongside Heinz Rühmann in "Quax in Afrika" (1944).

After the end of the war, Brody was able to continue his acting career at DEFA and also performed as a lead singer and drummer with the band "Mc Allen".

Louis Brody died on February 11, 1951 in Berlin. His grave at the Berlin-Hohenschönhausen cemetery no longer exists today.