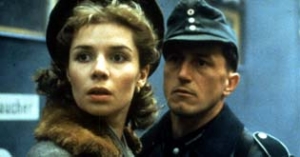 This drama about rubble women stays true to the Bavarian vernacular. "Rama dama" means "We are clearing the streets from rubble". Kati, a hairdresser from Munich, has been bombed out and has fled to the countryside. There, she gives birth to her second child in the turmoil of the end of the war. Her husband Felix went missing at the eastern front. On her return to Munich, Kati meets the soldier Hans. Together with Hans, she sets up in the ruins of her old house and slowly becomes romantically attached to Hans. But then Felix returns home – and Kati eventually has to decide between both men.