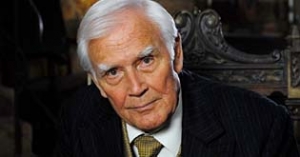 Joachim Karl Fuchsberger, born March 11, 1927, in Stuttgart, grew up in Heidelberg. He went to secondary school but was then drafted for the Reich Labour Service and became a parachutist at the Eastern front at the end of the war. After British war captivity, Fuchsberger worked in several jobs as a miner, mechanic, conferencier or "Wochenschau" anchor. From 1953 on, Fuchsberger appeared in several supporting roles in films by Munich-based director Anton Kutter. Fuchsberger made his breakthrough in Paul May's "08/15" trilogy (1954 to 1955) based on Hans Hellmut Kirst's novels. His part as Wehrmacht private Asch was followed by several other parts in war movies.

During the 1960s, Fuchsberger, who was called "Blacky" for his (then) dark hair, became one of the biggest stars of German mainstream cinema. He played the part of the inspector in numerous Edgar Wallace films, including "Das Gasthaus an der Themse" ("The Inn on the River") and "Der Hexer" ("The Wizard"). When the quality of the films of the Edgar Wallace series dropped significantly at the beginning of the 1970s, Fuchsberger appeared in several less successful European genre films ("Der letzte Mohikaner" - "The Last Tomahawk"; "Himmelfahrtskommando El Alamein" - "Commandos") and starred in "Das fliegende Klassenzimmer" ("The Flying Classroom"), based on Erich Kästner's novel, before putting his acting career into hiatus.

From 1973 on, Fuchsberger exclusively worked as a TV quiz show and talk show host and hosted 60 episodes of the saturday night quiz show "Auf los geht"s los" (1977 to 1986). From December 1980 to the end of 1989, Fuchsberger also hosted the celebrity talk show "Heut' abend". At the end of the 1980s, Fuchsberger temporarily retreated to his home in Australia that he had purchased in 1983. But in February 1990, he returned to host the ARD game show "Ja oder Nein".

Apart from a minor role in Eckhart Schmidt's film "Der Fan" ("Trance", 1982), Fuchsberger did not appear in TV productions until the mid-1990s. He then starred in several TV movies, predominantly as a count or a king. With "Neues vom Wixxer", he ended his 25-year movie hiatus in 2007 and parodied his signature role of the classic Edgar Wallace films.

Joachim Fuchsberger passed away on September 11, 2014 in his home in Grünwald near Munich.