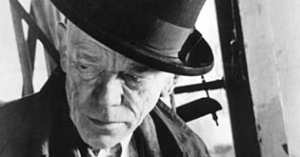 Karl Valentin (born Valentin Ludwig Frey) was born on June 4, 1882, in the Munich suburb of Au. After an apprenticeship as a carpenter, he performed as a humorist in and around Munich. When his father died in 1902, Valentin had to continue the proceedings of the furniture removers "Falk & Fey". Four years later, in 1906, Valentin had to sell his father's company. He then built an orchestrion from "nearly twenty instruments of all kinds" and toured with it for several months in 1907 without success.

In 1908, Valentin performed one of his monologues ("Das Aquarium") for the first time in public. The success of this performance led to his engagement at the famous Munich folklore stage at the "Frankfurter Hof". In 1911, he met Elisabeth Wellano, a soubrette. He persuaded her to become his comedy partner and invented her stage alias, Liesl Karlstadt. Together, they performed in revue shows and theatres and toured Vienna, Zürich, and Berlin.

In 1931, Valentin opened his own theatre in Munich but already had to close it after a few months. Then, in 1934, he opened the "Panoptikum", a collection of curiositites. But Valentin had to shut down this project, too, due to the lack of visitors. The "Panoptikum" was also one of the reasons why Valentin parted ways with Liesl Karlstadt. From 1939 on, Valentin tried to substitute her with Annemarie Fischer, another soubrette.

In 1912/13, Valentin dabbled in film for the first time. During the 1910s, he filmed many of his short scenes, with Liesl Karstadt and himself as actors. Valentin also played leading as well as supporting roles in films by other directors, for instance in the "surrealist" film experiment "Mysterien eines Frisiersalons" ("The Mysteries of a Hairdresser's Shop", 1923), directed by Bertolt Brecht and Erich Engel, and in "Die verkaufte Braut" ("The Bartered Bride", 1932) by Max Ophüls. During the Nazi regime, Valentin's films were heavily censored which nearly banned Valentin from filming. Some of his films were labelled adult only, while others were completely forbidden.

In 1941, Valentin made his last film, "In der Apotheke", based on one of his stage scenes. From 1942 to 1947, Valentin withdrew from the stage but then attempted a fresh start. However, he rarely succeeded to place his work at radio stations or in newspapers.

On February 9, 1948, Karl Valentin died, forgotten and impoverished, in Planegg near Munich.