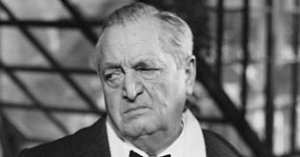 Johann Julier, born August 6, 1880, in Vienna, as the third child of the Academic sculptor Franz Julier and his wife Serafina, born Pöschl. He grew up in the Margarethen district, attended secondary and commercial school and worked in accounting of a leather goods store in Vienna and In Leopoldstadt before he took paid acting lessons at Otto theatre school for a short period of time. He also took elocution lessons from the court actor Josef Moser whom he also named himself after from then on.

At the age of 17, Moser got his first engagement at a theatre in Friedek-Mistek at the Ostravice river and then went to Laibach. He also performed as an extra and as a choir singer in Czernowitz and in Cilli. At German theatres in Bohemia, in Josefsstadt, and in Reichenberg, he landed his first speaking roles. From October to December 1902, he did his military service at III. Ersatz-Compagnie of Infanterie-Regiments Nr. 4 (Hoch- und Deutschmeister).

From January 1903 on, Moser was a cast member of Theater in der Josefstadt under artistic director Josef Jarno. In 1907, Moser quit because he mainly played children’s roles due to his shortness. Again, he toured Bohemian villages, Styria, Moravia, and Hungary with travelling theatres.

After the end of the war, Moser again performed in cabaret shows, became a cast member of Rolandbühne in 1920, and appeared in farces and one-act plays at Vienna’s vaudeville shows and musical theatres. Moser also successfully performed as a character comedian in sketches, including Fritz Löhner-Beda’s "Der Patient" (performed at Varieté Reklame, 1922; made into a film in 1932) and the self-written "Der Dienstmann" (performed by Die Budapester in 1923 and made into a film version in 1928 and in 1932, this time starring Moser’s daughter).

Moser then performed in revues of Varieté Ronacher and played, for instance, Pompfunèbrer in "Wien, gib acht!" that premiered on November 4, 1923, and in operetta productions by Theater an der Wien, where he played, for instance, the valet in "Gräfin Mariza" that premiered on February 28, 1924, or an usher in "Der Orlow" that premiered on April 3, 1925. In 1925, Max Reinhardt engaged him for Theater in der Josefstadt. Moser also performed at the Salzburg Festival between 1925 and 1927. In 1926, he performed for the first time at Deutsches Theater Berlin as Tartaglia in the Salzburg Festival production of "Turandot". In 1927/28, Moser also performed at New York’s Century Theatre on the occasion of a Reinhardt stand and played the role of Nick Bottom in "A Midsummer Night’s Dream".

Henceforth, Moser continued his theatre career in Berlin and in Vienna and worked with directors like Heinz Hilpert (Zauberkönig in Horváth‘s play "Geschichten aus dem Wiener Wald, Deutsches Theater, premiered on November 2, 1931) and Otto Preminger (Melchior in Nestroy’s play "Einen Jux will er sich machen", Theater in der Josefstadt, premiered on October 16, 1934). Between 1934 and 1939, he took only occasional engagements at Vienna’s Deutsches Volkstheater and Theater in der Josefstadt until he completely waived them to pursue his movie career.

However, Moser’s first supporting roles in silent films, for instance as a representative in "Die Stadt ohne Juden" ("The City Witout Jews", 1924), based on Hugo Bettauer’s novel, as a commissionaire and bailiff in "Die Familie ohne Moral" (1926/27) and "Spitzenhöschen und Schusterpech" (1928), did not come off successful.

His early sound film comedies were dominated by the established comedians from Berlin. Moser’s muttering and his rowing gestures did not become accepted until he played a pawnbroker in the Schubert film "Leise flehen meine Lieder" ("Lover Divine", 1933) and a gardener in the melodrama "Maskerade" ("Masquerade in Vienna", 1934), his Viennese films directed by Willi Forst. In comedies, mainly directed by E. W. Emo, Geza von Bolvary, or Carl Lamac, Moser played nasty factotums.

Uniforms, uniform caps, and waiter coats became the regalia of his characters. "Moser played morose and serving characters, the petty bourgeois as a misanthrophe became his metier. But he was no misanthrope, not broken by the feints of his class but by the affectations of the ruling class. His grumpiness was also a sign of his frustration with serving." (Witte, 1981). Moser was the contrast to the composed North Germans Theo Lingen and Heinz Rühmann and fought out skirmishes with Adele Sandrock and with Ida Wüst.

Together with Paul Hörbiger, he headed the Viennese clan of film comedians that included Oskar Sima, Annie Rosar, Rudolf Carl, Leo Slezak, and Lucie Englisch. His portrayals of old Kennthaler in "Vorstadtvarieté" ("Suburban Cabaret", 1934), directed by Werner Hochbaum, of the comedian Melchior in "…nur ein Komödiant" ("Only a Comedian", 1935), directed by Erich Engel, and of the dog catcher Haslinger in "Das Gäßchen zum Paradies" ("Paradise Road", 1936), directed by Mac Fric, were the most distinct emanations of his art of characterization. "The laughter he caused was an expression of uncried tears about the humiliations of his commissionaires and little guys; his moaning was the suitable effort to retain human dignity in a time that was inept to this end." (Karasek, 1980).

From 1933 on, Moser needed a "special concession" to be able to work in the film business in Berlin. His wife Blanca Moser left Germany in 1939 because of her Jewish heritage. After the end of the war, they both lived temporarily on Baden near Vienna. Moser played his "Dienstmann" at Landestheater Salzburg – in englisch – for members of the occupation forces. From 1947 on, he again performed at theatres in Vienna.

In 1948, Moser made guest performances at Paul Walter Jacob’s Freie Deutsche Bühne in Buenos Aires (where Moser’s daughter lived) and for German emigrants at New York’s Carnegie Hall. In several post-war films that were tailor-made for him, including "Der Herr Kanzleirat" (1948), "Hallo, Dienstmann" (1951), and "Der Onkel aus Amerika" ("His Majesty King Ballyhoo", 1952/53), Moser varied his signature role of the choleric stickler until he more and more appeared in superficial Viennese films like "Kaisermanöver" (1954) and "Kaiserball" (1956). He then appeared in harmonized adaptation of Nestroy plays like "Einen Jux will er sich machen" (1953) and "Lumpazivagabundus" (1956), before he starred in remakes of fading classics like "Der Kongreß tanzt" ("Congress Dances", 1955) and "Die drei von der Tankstelle" (1955), and of old Moser films like "Die Deutschmeister" ("A March for the Emperor", 1955), "Opernball" ("Opera Ball", 1956), and "Unentschuldigte Stunde" ("The unexcused hour", 1957). His acridity, mellowed by age, gave way to sentimental resignation. Besides Emo and the Marischka brothers, he mainly worked with director Franz Antel and, finally, with Werner Jacobs.

Surrounded by old comrades, Moser who always chose his roles regardlessly, also appeared in films with a younger generations of comedians like Georg Thomalla, Gunther Philipp, or Trude Herr.

During the course of the 1950s, Moser reduced his theatre work to occasional performances at theatres in Vienna and in Munich. He used the opportunity to demonstrate his unimpaired serious acting skills in the role of Vater Weiring in Schnitzler’s play "Liebelei" ("The Reckoning") – his first ever role in a production of Vienna’s Burgtheater that premiered on June 12, 1954, and was directed by Ernst Lothar. In 1957, Moser starred in the TV movie of the same name, and in 1961 he played the role of Zauberkönig in the TV adaptation of "Geschichten aus dem Wienerwald" and the role of Hohes Alter in the Salzburg Festival production of "Der Bauer als Millionär". Moser made his last stage performance on November 12, 1963, as divine police law clerk in a production of Molnár’s "Liliom", directed by Kurt Meisel.

Hans Moser died on June 19, 1964 at Vienna’s Hanuschkrankenhaus and was buried at Zentralfriedhof on June 24, 1964.