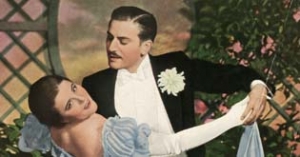 Willi Forst’s elaborate story of morality and love is set in the early 20th century in Vienna: Anita Keller is engaged to Hofkapellmeister Paul Harrandt. At a carnival party that is also attended by Paul’s brother, the surgeon Carl Ludwig Harrandt, and his wife Gerda, Anita meets her former lover, the painter Heideneck. Although Anita uninhibitedly flirts with him, Heideneck has only eyes for Gerda but she indignantly refuses to go back to his studio with him. However, Gerda already awaits him when he returns to his studio: Dressed only in a mask and a handwarmer, she wants Heideneck to paint her. By accident, the dicey painting is revealed to the public, and everyone thinks that Anita is the model. Pressed by Paul Harrandt and to save himself, Heideneck claims that he has not painted Anita but a certain Fräulein Dur. And indeed, Harrandt traces a woman called Leopoldine Dur who works as a reader for Countess Metternich. When Heideneck meets his reputed model, he falls in love with a woman with his whole heart for the first time in his life. But with her jealousy, gutted Anita conjures up a disaster.