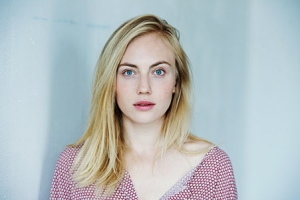 Elisa Schlott was born in Berlin on 7th of February 1994. She made her debut as an actor as a teenager playing an important role in the TV adventure film "Das Geheimnis von St. Ambrose" (2006). A year later, she starred in a central role in "Die Frau vom Checkpoint Charlie" as the daughter of a former GDR citizen (Veronica Ferres), whose kids are being held by the SED regime. After that, Niki Stein cast her in a lead role for his social drama "Der große Tom" (2008, TV) about a 12-year old boy who has to look after his younger sister after their mother ran off.

Her first major role in a feature film was in another somber family drama: "Draußen am See" ("Loosing Balance", 2009, director: Felix Fuchssteiner) is about a family that goes into a bad state after the father loses his job. For her performance in that film, she won the Best Actress Newcomer Award at the Filmfest Munich. After a small role as a thieving teenager in "Giulias Verschwinden" ("Julia's Disappearance", CH 2009), she again appeared in lead role: In "Fliegende Fische müssen ins Meer" (CH/DE 2011), she portrays the pubescent daughter of a slightly out of depth, happy-go-lucky mother (Meret Becker).

She then starred in smaller roles in Dominik Graf's "Das unsichtbare Mädchen" (2011) and in Nina Grosse's "Das Wochenende" ("The Weekend", 2012). Her portrayal of the daughter of a former Red Army Faction sympathizer in the latter won her the New Faces Award. She also received critical acclaim for her performance in the TV film "Finn und der Weg zum Himmel" (2012), in which she played a stroppy girl who is abused by her father.

In September 2014, Elisa Schlott started studying acting at the University of Music and Theatre 'Felix Mendelssohn Bartoldy' in Leipzig, in order to receive proper training for stage acting as she stated in an interview. During that time she continued working for both, TV and cinema productions. In the short film "La Cigale et la Fourmi" ("The Cricket and the Ant", 2016), she starred as a graduate who has fallen in love with her teacher, a role that won her the Best Actress Award at the TeaDance Gay and Lesbian Film Festival in Columbia, South Carolina (USA). She received further awards at film festivals in Aubagne (France) and Quito (Ecuador) for her portrayal of a rebellious 17-year-old in Stephan Lacant's "Fremde Tochter" ("Strange Daughter", 2017), who accidentally gets pregnant by her Arabian boyfriend.

Hans-Christian Schmid cast Schlott in his TV mini series "Das Verschwinden" (2017) for the key part of a small town teenager that disappeared without a trace. In addition to her work in TV and film, she was also a member of the ensemble at Schauspielstudio Köln in the season 2016/17 and 2017/18.

In 2018, she appeared in Markus Imboden's "Der Richter" as the kidnapped daughter of a judge (Heino Ferch) as well as in Rudi Gaul's comedy film "Safari - Match me if you can" as a social media influencer who is looking for affairs on a dating app.