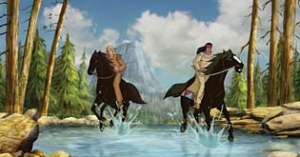 Located in Arizona in the year 1869, the animation film "Winnetoons" tells the story of the adventures of the legendary westerners Old Shatterhand and Winnetou. The blood brothers have got their hands full and have to pass several adventures. For instance, they have to arrest the ruthless Colonel Brinkley and his gang who are robbing trains and thus are delaying the expansion of an important railway line. When Brinkley learns that Bobby, an orphan boy, has a mysterious map that is supposed to lead the way to the hidden treasure at Silver Lake, he kidnaps the boy and Winnetou′s sister Nscho-tschi to get his hands on the map. Now, Winnetou and Old Shatterhand have to hunt the bandits down before they can hurt Bobby and Nscho-tschi.