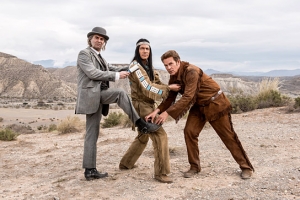 Based on the successful TV comedy show, "Bullyparade - Der Film" ("Bullyparade – The Movie") was created on the occassion of the show's 20th anniversary. Following the set-up of the TV show, the film is divided into five episodes that focus on some of the show's most beloved characters. The episode "Wechseljahre einer Kaiserin" ("Change of life of an empress") shows Austrian emperor Franz and empress Sissi getting stuck in a haunted castle while searching for a suitable holiday home. In "Winnetou in Love", Ranger risks everything to save his blood brother Abahachi from getting married overhastily. In "Zurück in die Zone" ("Back into the Zone"), for their aunt's 90th birthday the Kasirske brothers want to make her biggest wish come true and travel through time back to the GDR. In "Planet der Frauen" ("Planet of Women"), Captain Cork, Mr. Spit amd Trashy receive an intergalactic emergency call from a remote planet, whose all-female population is threatened by a villain. In "Lutz of Wall Street", buddies Lutz and Löffler want to make big money at the New York Stock Exchange with the help of a broker called Mr. Moneymaker.