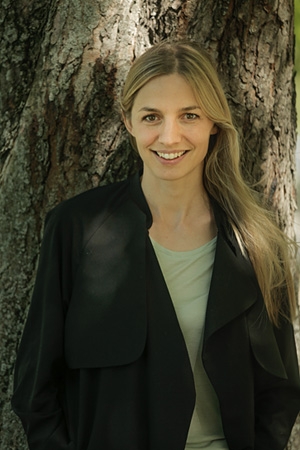 Annika Greta Blendl was born in Regensburg in 1982. After finishing school, she moved to Berlin where she acted in commercials and worked as a model. After appearing in a number of short films, the autodidact made her feature-length debut in 2002 with a supporting role in the romantic comedy "Love Crash" (TV). In the following years she played supporting roles in numerous other TV films, including Bernd Fischerauer's "In der Mitte eines Lebens" (2003) and Dominik Graf's "Kalter Frühling" ("Cold Spring", 2004), and had guest appearances in series such as "Wolffs Revier" and "Die Rettungsflieger".

On the big screen, Blendl appeared in supporting roles as a nurse in Michael Klier's "Farland" (2004) and as an agent in Christian Petzold's "Gespenster" ("Ghosts", 2005); she had a key role as a Polish villager in Thomas Wendrich's bizarre drama "Maria am Wasser" (2006). In 2007, Blendl played a leading role in the four-part crime series "Donna Roma", as the daughter of the Chief Commissioner embodied by Jutta Speidel. Guest roles in other series followed, including in "Polizeiruf 110" and several "Tatort" episodes.

In Matthias Tiefenbacher's feature-length episode "Die Schöne vom Beckenrand" (2008) from the crime series "Ein starkes Team", she had the title role of a mysterious lifeguard. In "Transit" (2010), Philipp Leinemann's award-winning HFF graduation film, Blendl played a leading role as a prostitute fleeing from her brutal pimp. In the adventure TV film "Die Jagd nach dem Bernsteinzimmer" ("The Hunt for the Amber Room", 2012), directed by Florian Baxmeyer, she impersonated an archaeobotanist who turns out to be Albert Einstein's great-granddaughter. Much more serious fare was the GDR drama "Wir wollten aufs Meer" ("Shores of Hope", 2012), in which Blendl had a supporting role as the wife of a harbour worker (Ronald Zehrfeld) who wanted to flee. In 2014/2015 she took on a recurring role as a police assistant in the crime series "Kommissar Dupin".

In addition to her acting work, Annika Blendl studied documentary film directing at the Hochschule für Fernsehen und Film in Munich in 2009. During her studies she co-directed with Leonie Stade the highly acclaimed documentary film "Nowhereman" (2012), about the resocialisation attempt of a 22-year-old petty criminal.

Together with Stade and fellow student and film scientist Michael Schmitt, Blendl founded the production company "Man on Mars" in 2013. At the Munich Film Festival 2015, Blendl and Stade presented their second joint documentary film: "Mollath - Und plötzlich bist Du verrückt", about the case of Gustl Mollath, who was innocently committed to psychiatry.

First and foremost, however, Blendl has been active as an actress. She appeared in various TV series and belonged to the ensembles of television films such as "Kalt ist die Angst" (2016) and "Ein Sommer auf Zypern" (2017). On the big screen she played in the comedy "Einmal bitte alles" (2017), the thriller "Luna" (2017) and the award-winning drama "Alles ist gut" (2018).

In autumn 2017, Bendl together with Leonie Stade began filming "All I Never Wanted", a satirical tragicomedy with autobiographical documentary elements about four women who are looking for their professional place in the world of media, theatre and fashion and have reached their limits. The film was Blendl's HFF graduation film and premiered at the Munich Filmfest 2019; it was released in December 2019.

Since autumn 2019, Blendl has been playing commissioner Pia Walther in the ZDF crime series "Das Quartett". She also continued to play a leading role as Breton police secretary in the ARD crime series "Kommissar Dupin".