All I Never Wanted 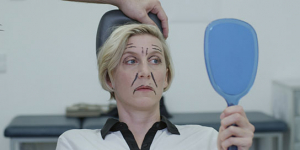 17-year-old Nina drops out of school to concentrate fully on a modeling career in Milan, while Mareile, in her mid-forties, loses her role in a TV series because she has been replaced by a younger actress. The filmmakers Leonie Stade and Annika Blendl accompany the two women in their satirical feature film with documentary elements and show them in their different attempts to find recognition and attention in a superficial world of glamour. The price the women pay is high: existing moral concepts must be abandoned and a perfect image of oneself needs to be created, which in turn has little to do with one's own personality. The filmmakers, who appear in their film themselves, also reflect on their own situation when they have to decide what they are prepared to sacrifice for the success of their film.