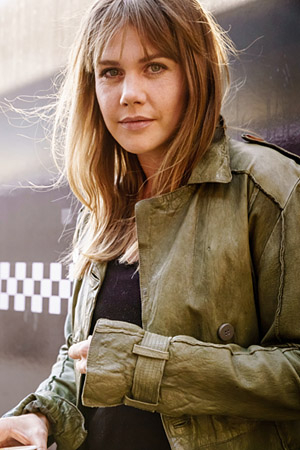 Felicitas Woll was born on 20 January 1980 in Homberg (Efze) and grew up in Harbshausen (Hesse). She originally trained as a nurse, but was then discovered by an casting agent and started her acting career with a role in the TV series "Die Camper", while taking acting lessons at the Düsseldorf Tanzhaus NRW. Guest and recurring roles in "Für alle Fälle Stephanie", "Hamann Spezial" and the German-Chinese TV series "True Love is Invisible" followed.

Felicitas Woll had her first success on the big screen in 2001 with the role of Victoria in Dennis Gansel's teen comedy "Mädchen, Mädchen" ("Girls on Top"). From 2002 through 2005 she appeared in a lead role as Carlotta "Lolle" Holzmann together with Sandra Borgmann, Jan Sosniok and Matthias Klimsa in the ARD pre-watershed series "Berlin, Berlin". In 2002 she received the German Television Award in the category "Best Actress - Series". In 2003, Felicitas Woll was also awarded the "Grimme Prize" for her portrayal of Lolle and in 2004 she received the "Golden Rose of Lucerne".

During her time with "Berlin, Berlin" Woll also appeared in an episode of the "Tatort" series as well as in the TV movie "Inshallah - Club der Träume". In 2003 she played the female lead role of a young woman who loves fast cars and dreams of participating in the Paris-Dakar Rally in the romantic feature film "Abgefahren - Mit Vollgas in die Liebe".

She was awarded the Bavarian Television Prize for her performance in the TV two-parter "Dresden" (2006) directed by Roland Suso Richter. Alongside Benjamin Sadler, Elena Uhlig and Wolfgang Stumph she played a young German nurse, Anna Mauth, who falls in love with a British pilot during the bombing of the city in February 1945. On the big screen she appeared in 2010 in "Vater Morgana" and in 2011 in "Kein Sex ist auch keine Lösung". In January 2013, the adventure drama "Die Männer der Emden" was released in German cinema, while at the same time, another feature film with her was presented at the Max Ophüls Film Festival: In "Ein schmaler Grat" she embodies a journalist who seeks contact with a serial killer.

Since 2013, Felicitas Woll has been starring as Commissioner Pia Kirchhof (from 2018 Pia Sander) at irregular intervals in the TV adaptations of Nele Neuhaus' bestselling crime novels. Parallel to this, she has also been working for other TV productions, many of which show her in the leading role. For example, in the court drama "Die Ungehorsame" (2015) she played a woman accused of murdering her husband. In 2016 she was seen in several TV movies, including in the female lead role of the romantic comedy "Weil ich Dich liebe" ("Because I Love You …"), which follows the ups and downs of a couple from the moment they meet until the divorce date. A year later, the drama "Nackt. Das Netz vergisst nie" was broadcast, in which Woll plays a mother fighting for justice when her daughter becomes the victim of revenge pornography. In the TV adaptation of the bestseller "Das Nebelhaus" (2017), she is a journalist, who investigates a mysterious rampage that happened two years ago on a lonely island in the Baltic Sea. In the TV drama "Kranke Geschäfte" ("The Placebo Effect", 2019), directed by Urs Egger, she embodies a mother whose daughter suffers from multiple sclerosis and is offered to act as a test candidate for new drugs.

Also in 2019, after several years of working for TV exclusively, she was back in front of the camera for a feature film: In Franziska Meyer Price's "Berlin, Berlin", which is a follow-up of the successful TV series of the same name, she revisits the role of Lolle, who finds herself exposed to great emotional chaos when her ex-boyfriend Sven confesses his love for her at her wedding party of all places.