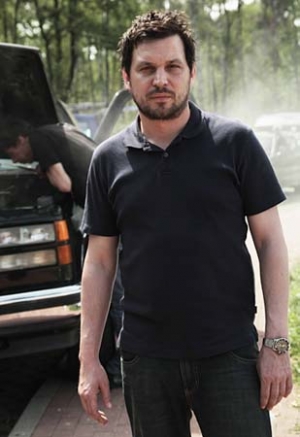 Sascha Alexander Geršak was born in Balingen in 1975. At the age of 26, he moved to Zurich, where he attended the European Film Actor School until 2003. Since then, he appeared in numerous stage productions at the Schauspielhaus Zurich and the Rote Fabrik Theater Zurich. In 2008, he won the award for Best International Actor at the "Fajir-Theater-Festival" in Teheran for his performance in a stage production of "Rashomon".

Sascha Alexander Geršak made his screen debut in the tragicomedy "Sonntag" (CH/D 2007), playing the lead role of an orderly, who helps a suicidal female inmate to escape from the psychiatric ward. He had a memorable supporting role in Dominik Graf's acclaimed miniseries "Im Angesicht des Verbrechens" (2010), played a hostage-taker in the "Tatort" episode "Die Heilige" (2010) and appeared as a murder suspect in the episode "Krieger" of the series "Kommissar Stolberg" (2012).

Geršak caught wide attention with his leading role in the award-winning "5 Jahre Leben" ("5 Years", 2012): He plays the German-Turkish citizen Murat Kurnaz, who became a terror suspect following 9/11 and was incarcerated in the US detention camp Guantanamo from 2002 until 2006. The film was released in Germany in May 2013. In the same month, "Tore tanzt" ("Nothing Bad Can Happen") premiered at the Cannes IFF. In the film, Sascha Alexander Geršak plays a family man who befriends a young Jesus Freak, but then starts to humiliate and abuse him.

At the German Film Prize 2014, Sascha Alexander Geršak was nominated for best actor for his role in "5 Jahre Leben". He won the Best Actor award at the German Film Critics' Prize for this role and for "Tore tanzt".

In the next few years, Geršak was seen in a variety of film and TV productions, mostly in leading roles. These ranged from light comedies such as the crime thriller "Winterkartoffelknödel" (2014) and the sports betting mafia thriller "Auf kurze Distanz" ("Point Blank", 2016, TV) to the coming-of-age drama "Die Mitte der Welt" ("Center of My World", 2016) and the oppressive war drama "Der Hauptmann" ("The Captain", 2017). He also appeared in the love story "Axel, der Held" (2017) and the TV two-parter "Gladbeck" ("54 Hours"), in which he portrayed one of the two real life hostage-takers, Hans-Jürgen Rösner. For this performance, Geršak received nominations for the German Acting Award and the German Television Award. For the TV-drama "Somewhere in Tonga" by Florian Schewe he received the award for Best Actor at the Milano International Film Festival.

Geršak played other leading TV roles as a war invalid suspected of murder in the "Tatort" episode "Bombengeschäfte" (2018) and as the brother of a man innocently convicted of murder in the two-parter "Unschuldig" (2019). On the big screen, he was seen in the highly acclaimed social drama "Kids Run" (2020) as the friend and boxing coach of a desperate father. Also made for theatrical release was Detlev Buck's gangster comedy "Wir können nicht anders" ("Christmas Crossfire"), about a pair of lovers who get in the way of a provincial gangster (Geršak) in Brandenburg. Due to the COVID 19 pandemic, however, the film was not released in theaters but on Netflix in December 2020.