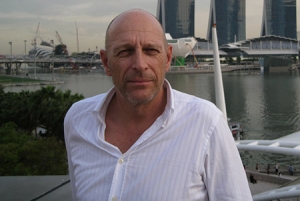 Tomas Erhart was born January 10, 1959 in Oberammergau and studied at UCLA. While studying, he gained hands-on experience as lightning technician and grip. In the 1980s he worked as camera assistant shooting commercials. Since 1990, Erhart has been DOP for numerous TV and big screen productions such as Willy Bogner's ski action film "Feuer, Eis & Dynamit" ("Fire, Ice and Dynamite", 1990).

In 1991, he was one of the founders of Filmakademie Baden-Württemberg, the first German university to offer a camera major. He also worked there as a lecturer until 1997. Next to his work in film, Erhart has been probing the conceptual and technical possibilities of digital photography since the mid-nineties. His digital art projects were on display in Hamburg, Berlin and Bregenz.

As a cameraman he was nominated for the RTL Golden Lion Award, honoring his work in the disaster movie "Der Todesbus" ("Bus 152", 1997, TV) and "Das Böse" (1998, TV). He received an honorable mention at the Deutscher Kamerapreis for his photography in the crime film "Das gestohlene Leben" (TV) in 2000. At the festival Camerimage in Lodz, Poland, his atmospheric images in Volker Schlöndorff's "Der neunte Tag" ("The Ninth Day", DE/LU 2004) were critically acclaimed and garnered him another nomination for the Kamerapreis. In 2007, he finally received the award for the historical period drama "Die Mauer – Berlin '61" (2006, TV).

In addition to many other made-for-TV productions, Erhart also worked in cinema. He was awarded the Austrian film award "Romy" for Best Camera in the disaster movie "Der Atem des Himmels" (AT 2010). Another Austrian film he photographed was the spy thriller "Harodim" in 2012.

Together with Klaus Regnerps he worked as a cameraman on the 3D documentary "Berliner Philharmoniker in Singapur – A Musical Journey in 3D" (DE/GB/JP 2011). He returned to 3D as DOP and producer in "Wacken 3D" (2014), a stereoscopic documentary on the famous heavy metal festival.

In the teen movie "Bruder vor Luder" Tomas Erhart not only proved his expertise for capturing music on camera but, for the first time, took to directing himself – in cooperation with the film's stars Roman Lochmann and Heiko Lochmann.