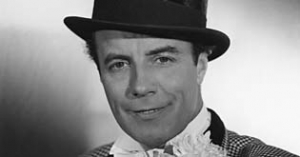 Johan Marius Nicolaas Heesters, born December 5, 1903, in Amersfoort (Netherlands), initially wanted to become a Catholic priest but then completed an apprenticeship as a bank clerk. He then attended singing and acting lessons in Amsterdam and started his stage career. In 1924, Heesters landed his first role in the Dutch silent movie "Cirque Hollandais". In 1930, he married the Belgian actress Louise H. Ghijs. The couple stayed together until her death in 1985. During the mid-1930s, Heesters became an operetta tenor and made his first sound film appearances in Richard Oswald's Dutch production "Bleeke Bet" and in the Austrian-Dutch co-production "De vier Mullers".

Shortly after the war, Heesters performed the role of Count Danilo in Lehár's operetta "Die lustige Witwe" ("The Merry Widow") for more than 1600 times. Lehár's song "Heut" geh" ich ins Maxim" ("You"ll Find Me at Maxim's") became a popular evergreen that audiences always linked to Heesters – along with his signature costume, a white silk scarf and a top hat. Heesters also celebrated a large success with the musical "Gigi". His post-war movies mainly based on operetta references. In 1953, Otto Preminger brought him to Hollywood where he starred in the society comedy "Die Jungfrau auf dem Dach" ("The Girl on the Roof") and played the same role David Niven played in the US version of the film, "The Moon Is Blue". In 1961, Heesters starred in his preliminarily last movie in the pop music film "Junge Leute brauchen Liebe", directed by Geza von Cziffra.

During the 1960s and 1970s, Heesters appeared in numerous TV movies and in TV shows that were tailor-made for him. In 1982, he performed in a subtle character study alongside Carl Heinz Schroth in Neil Simon's "Sonny Boys". He also toured with his signature performance as aging Casanova in "Casanova auf Schloss Dux" and played the character about 540 times. In 1982, Theater an der Wien endowed the Johannes Heesters ring and made him its first bearer.

In 1985, Heesters starred in his first movie role after a 25-year break in "Otto – der Film", the movie debut of comedien Otto Waalkes. After several further appearances in TV productions, Heesters returned to the movie screen after another 23-year break in Til Schweiger's medieval comedy "1½ Ritter" ("1½ Knights - In Search of the Ravishing Princess Herzelinde").