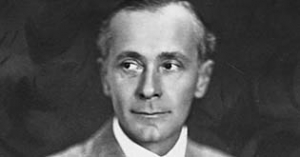 Alfred Abel, born March 12, 1879, in Leipzig, already worked as an occasional actor during his apprenticeship as a gardener. After an accident, he discontinued his apprenticeship, attended drawing lessons and eventually started to study art drafting at the Leipzig art academy. He then took private acting lessons before his acting teacher placed him at the theatre in Luzern.

In 1904, he went to Deutsches Theater upon a recommendation by fellow actor Rudolf Christians. In 1913, after a successful stage career, Abel played his first role in a movie in Max Reinhardt's "Eine Venezianische Nacht". During the following years, Abel worked with several important directors and starred in films like Ernst Lubitsch's "Die Flamme", F.W. Murnau's "Phantom" ("The Phantom"), and Fritz Lang's "Dr. Mabuse, der Spieler" ("Dr. Mabuse, The Gambler").

After the advent of the sound film, Abel became more and restricted to the role type of elegant, intelligent gentlemen and aristocrats and starred in films such as "Dolly macht Karriere" ("Dolly’s Way to Stardom") or "Der Kongreß tanzt" ("Congress Dances"). Time and again, Abel tried to thwart this stereotypical cast with satirical gestures, for instance, in "Hofkonzert" ("The Court Concert").

In the early 1920s, he set up his production company Artifex Film but only produced (and directed) the grotesque "Der Streik der Diebe" for his company. Afterwards, Abel directed three more films and was the dialogue director for Carl Hoffmann's film "Viktoria". His daughter Ursula Abel also became an actress but was banned from the profession in 1935 because she was not able to prove her father's "Aryan heritage".