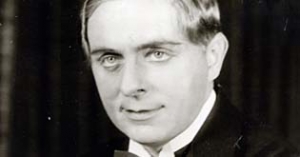 Friedrich Rudolf Klein-Rogge was born in Cologne on November 24 1885 (other sources state 1888 as the year of birth). After graduating from school and attending military academy, he studied art history in Berlin and Bonn and took acting classes.

In 1909, he made his stage debut as Cassius in Shakespeare's "Julius Caesar". In 1915, after engagements in Aachen, Kiel and Düsseldorf, he joined the Städtische Bühnen Nürnberg, where he worked as actor and director. Three years later, he transferred to the Lessing-Theater in Berlin and starred in major roles, including the bank director in Georg Kaiser's "Von morgens bis mitternachts" (1921).

He made his first screen appearance in "Der Film von der Königin Luise" (1912), and from 1919 on, Klein-Rogge worked frequently in film. Introduced by his ex-wife Thea von Harbou, he makes the acquaintance of Fritz Lang. This marked the beginning of a long-time collaboration, and Lang directed Klein-Rogge in a total number of ten films. Lang often cast the stocky actor in roguish roles, for example as the dervish in "Der müde Tod" (1921) or as the titular criminal power-monger in "Dr. Mabuse" (1922) – the role, which brought Klein-Rogge his breakthrough as a screen actor.

At the end of the 1920s, Klein-Rogge appeared in several French productions, including the early sound film "Le requin" by Henri Chomette. He reprised his Mabuse character in Lang's "Das Testament des Dr. Mabuse", a sound film and his last collaboration with the soon exiled director. Throughout the 1930s, Klein-Rogge remained an expert for sinister parts in films like "Elisabeth und der Narr" (1934) and "Hanneles Himmelfahrt" (1934). He often was cast in supporting roles, for instance alongside star Emil Jannings in "Der alte und der junge König" (1935), "Der Herrscher" (1937) and "Robert Koch, der Bekämpfer des Todes" (1939). Among his few comic roles are the Major Flumus in Detlef Sierck's "Das Hofkonzert" (1936) and Councilman Müller in "Die göttliche Jette" (1937).

After WWII, Klein-Rogge – who virtually disappeared from the screen in 1942 – unsuccessfully tried to re-establish himself as a screen actor. He relocated to Graz, Austria and worked as a director for the theatre.

On May 29th 1955, Klein-Rogge – who was married to Swedisch actress Mary Johnson – passed away after suffering from a stroke.