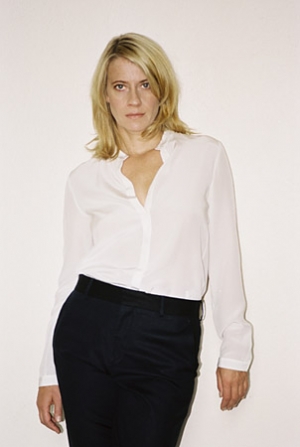 Caroline Therese Aksinia Peters was born in Mainz on the 7th of September 1971 and grew up in Cologne. She studied acting at the Hochschule für Musik und Theater des Saarlandes (University of Music Saar) in Saarbrücken. After her graduation, she became a member of the ensemble at the Schaubühne Berlin in 1995. From 1999 on, she worked with the Deutsches Schauspielhaus Hamburg, the Volksbühne Berlin and the Schauspielhaus Zurich. In 2004, she joined the ensemble of Vienna’s Burgtheater.

Since the late 1990s, Peters has also been starring in TV and film productions, among them Isabel Kleefeld's romantic comedy "Schluss mit lustig" ("Life Calling", 2001, TV). She had her first lead role in "Schöne Frauen" ("Beautiful Women", 2004), a TV film about five actresses who after an audition spend the day together. In the same year, she played a lead part in the Israeli feature film "Walk on Water" as the granddaughter of a Nazi war criminal. For her portrayal of a kleptomaniac in "Arnies Welt" ("Arnie's World", 2005), she received the Grimme Prize together with the film’s director Isabel Kleefeld and her co-stars Jörg Schüttauf and Matthias Brandt. Among other important TV productions she has starred in are Adolf Winkelmann‘s Gesellschaftsdrama "Contergan" ("Side Effects", 2007) and the family drama "Luises Versprechen" (2010).

She worked again with director Isabel Kleefeld for the mother-daughter drama "Schlaflos" (2009), the thriller "Im Netz" (2013) and the comedy "Zweibettzimmer" (2017). From 2008 through 2014, she played the lead role as a detective inspector in the humorous crime series "Mord mit Aussicht" that won her the Bayrischer Fernsehpreis (Bavarian TV Awards) in 2013. Her portrayal of the main character in the much-acclaimed romantic comedy "Süßer September" (2015, TV) won her the Deutscher Schauspielerpreis (German Actors Award).

In addition to her TV work, Caroline Peters has been an ensemble member of the Burgtheater in Vienna, where she appeared in a number of plays, such as in productions of Oscar Wilde's "An Ideal Husband" (2011/2012), in Yasmina Reza's "Bella Figura" (2015/2016) and in August Strindberg's "Hotel Strindberg" (2017/2018). For her role in "John Gabriel Borkman", she won "Actress of the Year" awarded by the theater magazine 'Theater heute'.

Peters' appearances on the big screen are less frequent. She starred in Gesine Danckwart's essay film "Umdeinleben" ("LifeTimeShort", 2008) about a number of women in big cities and played the lead role in the experimental fiction feature "Kalte Probe" ("Cold Rehearsal", AT/DE 2013). She starred in supporting roles in the relationship drama "Die Abmachung" (2014) as well as in Adolf Winkelmann's "Junges Licht" ("Young Light", 2016). In 2018, Peters appeared in another lead role: Sönke Wortmann cast her for his satirical comedy "Der Vorname" as the host of a dinner party during which a couple of friends start a fierce argument about the name Adolf.