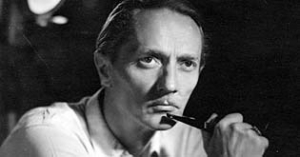 Rudolf Gustav Wilhelm Jugert was born in Hanover on 30 September 1907. After graduating from high school, he began studying to become a veterinary before switching to medicine. In 1931 he followed Katja Julius, his girlfriend of many years, to Leipzig and enrolled in theater studies, literature, and philosophy at the university there. He worked as an editor at the Schauspielhaus in Leipzig before being hired as a dramaturge there in 1934. Soon he was working as a director"s assistant and a director, eventually advancing to head director.

Katja Julius, who was jewish, emigrated to Italy in 1935, and Jugert joined her there in 1938. Julius provided him with the financial means to attend the film school affiliated with the Cinecittà Studios in Rome. In 1939 Jugert returned to Germany (with Julius) at the urging of Helmut Käutner, who wanted him as assistant director for his feature film debut "Kitty und die Weltkonferenz" (Kitty and the World Conference). Over the next four years, he worked as assistant director on almost all of Käutner"s films. Jugert was offered the opportunity to direct himself, but only under the condition that he produce a propaganda film for the Nazis; he refused.


After being drafted to fight in World War II and a period as an American POW in Italy, Jugert returned to Hanover in the summer of 1945, and he and Katja Julius were married. Once again, it was Helmut Käutner who opened the door for Jugert to work in film. After serving as assistant director on Käutner"s episodic film "In jenen Tagen" ("In Those Days") in 1947, he directed his first film for Käutner"s company Camera-Film GmbH, "Film ohne Titel" ("Film Without a Name") in 1947. With works such as the musical comedy "Hallo, Fräulein" (1949), the highly-acclaimed pacifist drama "Es kommt ein Tag" ("A Day Will Come") in 1950, "Nachts auf den Straßen" ("Detour") – which was filmed in 1952 and received the German Film Prize – and "Illusion in Moll" ("Illusion in a Minor Key"; also 1952), Jugert soon made a name for himself as a director of films that were both intelligent and entertaining. However, his career began to wane in the late 1950s after a series of less successful films.

From the early 1960s, Jugert concentrated on working in television. He quickly establish himself in the then young medium and uses hid hard-earned independence to make films based on his own scripts, such as "Berliner Blockade" (1968) and "Das Wunder von Lengede" (1969), as well as television series including "Der Bastian" (1973) and "Drei sind einer zuviel" (1977).