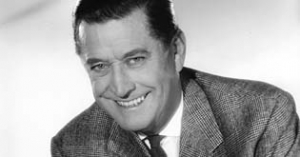 Hans Albert Edmund Söhnker was born in Kiel on October 11th 1903. His father was a carpenter and an active member of the Social Democratic Party. After finishing school, Hans Söhnker took up an apprenticeship in a warehouse and at the same time started taking acting lessons from Clemens Schubert and Gustaf Gründgens. In 1922, he made his stage debut at the Stadttheater Kiel, and subsequently played in theatres in Frankfurt/Oder, Danzig, Chemnitz and Bremen.

While visiting Germany, Ernst Lubitsch recommended Söhnker to Paramount in Berlin, and Söhnker applied at the company in 1933. He made screen tests for Ufa, and was finally cast as Marta Eggerth's partner in "Der Zarewitsch". After reprising the role of the young and careless lover for "Schwarzwaldmädel" and "Die Csardasfürstin", Söhnker avoided being typecast again and instead proved his ability to play more serious characters with "Arzt aus Leidenschaft". The understatement and elegance of his acting was reminiscent of American movie stars and made him an extraordinary presence in German cinema.

He excelled as the romantic rival of both Heinz Rühmann in "Der Mustergatte" and Hans Albers in "Große Freiheit Nr. 7". The latter was directed by Helmut Käutner, who frequently cast Söhnker and put his natural charm to its best use, for instance in "Frau nach Maß". After the war, Söhnker, who had always continued to work as a stage actor, returned to the theatre. He re-emerged as a movie actor with "Film ohne Titel", which was produced by Käutner and directed by Rudolf Jugert. Jugert also cast Söhnker in the comedies "Hallo Fräulein" and "1 x 1 der Ehe".

His dramatic performances in "Nur eine Nacht" and "Weiße Schatten" again proved his ability to shift effortlessly between genres, and the well aged Söhnker remained an elegant presence in the German Post-War cinema of the 1950s.

From the 1960s on, he starred in several successful TV series like "Der Forellenhof", "Salto Mortale" and "Meine Schwiegersöhne und ich", which sustained Söhnker's popularity up to his old age.

Hans Söhnker passed away in Berlin on April 20th 1981.