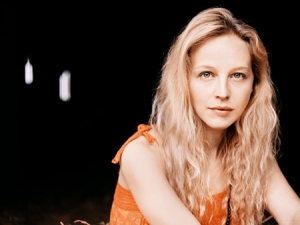 Petra Schmidt-Schaller was born in Magdeburg on August 28 1980. From 2001 to 2005, the daughter of actor Andreas Schmidt-Schaller and actress and director Christine Krüger studied at the "Felix Mendelssohn Bartholdy" academy for music and theatre in Leipzig. During that time, she performed at the Weimar national theatre, and following her graduation, she played at the Städtische Bühnen Osnabrück. Schaller made her TV debut in 2003 in an episode of the crime series "SOKO Leipzig"; her first screen role was in Ralf Huettner's comedy "Reine Formsache" (2006).

Her breakthrough came with her award-winning performance in Rainer Kaufmann's "Ein fliehendes Pferd", which was followed by notable turns in the TV drama "Das Beste kommt erst" (2008) and the feature film "Nacht vor Augen", which premiered at the Berlin IFF. Schaller then starred in the comedy "Balkan Traffic – Übermorgen Nirgendwo" (2008), and appeared in several high-profile TV productions. In 2011, Petra Schmidt-Schaller was featured in the comedy "Almanya - Willkommen in Deutschland", the box-office hit "Unknown Identity", the childrens" film "Löwenzahn" and the psychological thriller "Unter Nachbarn". Also that year, she starred in Marcus H. Rosenmüller's comedy "Sommer in Orange", playing a Bhagwan disciple from Berlin who founds a commune rural Bavaria in 1980.

In 2012, she received the Deutsche Schauspielerpreis for her portrayal of a mother whose baby was swapped by mistake in the dramedy "Das geteilte Glück". During the following years, she starred in a string of TV productions, including "In den besten Familien" (2012), "Der Wagner-Clan. Eine Familiengeschichte" (2013) and "Die kalte Wahrheit" (2014). On the big screen, she appeared opposite Jürgen Vogel and Moritz Bleibtreu in the thriller "Stereo", which premiered at the 2014 Berlin IFF. Her turns in the TV feature films "Das Dorf des Schweigens" (2015), "Ein gefährliches Angebot" (2016) and "Ein Mann unter Verdacht" (2016) garnered her a nomination at the 2017 German Television Awards.

Petra Schmidt-Schaller starred alongside Jürgen Prochnow in the 2017 theatrical release "Leanders letzte Reise" ("The Final Journey"), in which a 92-year-old war veteran travels with his granddaughter to Ukraine to look for a lost love.