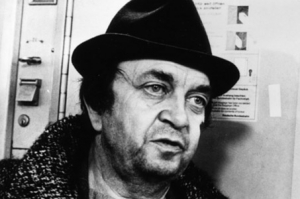 Wolfgang Kieling was born on March 16, 1924 in Berlin-Neukölln. His parents were amateur actors in a theater club, which meant that Kieling made his stage debut as a child, in the role of Karlchen in the folk play 'Mein Leopold'. At the age of six, he recorded his first record as a child soprano, followed by a career in children's radio, where he voiced 'Wölfchen' in the popular radio series "Kunterbunt".

After first appearances in short films, Kieling made his feature film debut in 1936 in Veit Harlan's "Maria, die Magd". In the following years, he appeared in numerous, mostly smaller roles. At the same time, he graduated from secondary school in 1938 and later took his Abitur at an Abendgymnasium, an evening school preparing students for university entrance qualification. He took acting lessons with Albert Florath and trained as an assistant director at Ufa.

In 1941 he joined the ensemble of the Landestheater der Mark Brandenburg in Luckenwalde, a traveling stage that made guest appearances at various provincial theaters; he then played at the Theater Potsdam. In 1942, his flourishing career was brought to an abrupt end when he was called up for military service. As a soldier, Kieling suffered severe wounds and was taken prisoner of war in Russia for several years starting in 1945; during this time, he organized a prisoner theater in different camps.

Kieling was released in 1949 and went to West Berlin. He worked as a theater actor throughout Germany as well as a news presenter and voice actor - lending his voice to Kirk Douglas on the dubbed version of "The Big Trees" (US 1952) and Sidney Poitier on "Red Ball Express" (US 1952), among others.

In 1950 Kieling married the actress Jola Jobst, who took her own life two years later. Shortly after, he married the actress Gisela Uhlen, with whom he moved to the GDR in 1954. The reason for the move was a custody dispute over Uhlen's daughter Barbara Bertram (from her marriage to director Hans Bertram). The film industry and the press, however, assumed a political motive, which cost the two some sympathy. At DEFA, Kieling landed roles in Konrad Wolf's postwar story "Genesung" (DD 1956), Carl Balhaus' resistance drama "Damals in Paris" (DD 1956) and Kurt Jung-Alsen's "Betrogen bis zum jüngsten Tag" (DD 1957), a war film based on a story by Franz Fühmann. As a narrator, Kieling participated in several short documentaries. In 1957, Kieling and Uhlen returned to West Berlin, where they got a divorce. Their daughter Susanne Uhlen (*1955) later also became an actress. With actress Ingrid Rentsch, he then had a son, Florian Martens (*1958), who also made a career as an actor. From 1969 to 1975 Kieling was married to the actress Monika Gabriel.

In 1958, Wolfgang Kieling had an engagement at the Staatsschauspiel Stuttgart, followed by the Residenztheater in Munich and other theaters throughout Germany. His most famous stage roles up to the end of the 1960s include the title roles in Shakespeare's "Richard III," Brecht's "The Unstoppable Rise of Arturo Ui" and Max Frisch's "Don Juan oder Die Liebe zur Geometrie," as well as Reichsvogt Gessler in Schiller's "Wilhelm Tell."

Kieling also starred on the big screen in a large number of prominent productions until the end of the 1960s. Notable were his performances as an aspiring doctor in Falk Harnack's Nazi war crime drama "Arzt ohne Gewissen" ("Doctor Without Scruples", 1959), as a detective superintendent in Helmuth Ashley's crime thriller "Mörderspiel" ("Murder Party", DE/FR 1961) and as a betrayed, desperate husband in Kurt Hoffmann's social study "Das Haus in der Karpfengasse" ("The House in Karp Lane", 1965), among others.

He came to greater international prominence with his part in Alfred Hitchcock's East-West thriller "Torn Curtain" (US 1966), as a Stasi agent who dies a gruesome death. While this didn't lead to further roles in Hollywood, he continued to be in demand as a supporting actor in European co-productions such as "The Vengeance of Fu Manchu" (GB/DE 1967).

In the 1960s, Kieling was also often seen on TV in crime dramas and in adaptations of famous stage plays. In 1966 he received the Golden Camera for his portrayal of Garcin in Sartre's "No Exit" - which he returned the following year in protest against the politics of the Springer publishing house who sponsors the award. In 1968, in protest against the Vietnam War, he had his Federal Film Award trophy auctioned off at the Republican Club in West Berlin for the benefit of the Viet Cong. In the same year he moved back to the GDR because of the Vietnam policy of the Americans and as criticism of the social conditions in the Federal Republic of Germany. He lived there until 1971, when the GDR leadership granted him special status so that he could continue to work in the West (although this rarely happened). He had great successes in DEFA productions during these years with the marriage story "Das siebente Jahr" (DD 1969), as a commissar in the three-part TV adaptation of Fallada's "Jeder stirbt für sich allein" (DD 1970), and as statesman Manuel de Godoy in the feature film "Goya" (DD/SU 1971, directed by Konrad Wolf) based on the novel by Lion Feuchtwanger.

Back in the West, after initial boycott attempts, the 'border crosser' Kieling advanced to become one of the most high-profile actors on West German television. Highlights of his television career were the role as an aging transvestite in the social drama "Im Reservat" (1973), for which he received the Grimme Award and the Television Film Award of the German Academy of Performing Arts, the lead role in the series "Der Anwalt" (1977-78) and the title role (alongside Michael Degen) in the Feuchtwanger adaptation "Die Geschwister Oppermann" ("Opperman Family", 1983). He also appeared in countless television dramas and took on guest roles in popular TV series such as "Das Traumschiff" and "Die Schwarzwaldklinik."

In addition, Kieling remained active as a radio play and dubbing actor until the mid-1980s, repeatedly lending his voice to stars such as Frank Sinatra, Glenn Ford, Paul Newman, Kirk Douglas, Philippe Noiret and Michel Piccoli (to name just a few examples). In the children's show "Sesame Street" he was the German voice of Bert from 1973 to 1985.

He was also occasionally seen in cinema roles, for example as the good-for-nothing friend of the main character in Alf Brustellin's Walser adaptation "Der Sturz" (1979). He was nominated for the German Film Award in 1984 and 1985 for his leading roles as a reporter in the political thriller "Morgen in Alabama" (1984) and as a staid accountant in the claustrophobic thriller "Abwärts" ("Out of Order", 1984, directed by Carl Schenkel). His last appearance on the big screen was in 1985 as a notary in the comedy "Didi und die Rache der Enterbten" ("Nonstop Trouble with the Family").

On October 7, 1985, Wolfgang Kieling died in Hamburg after a stomach operation he had undergone to treat his cancer.