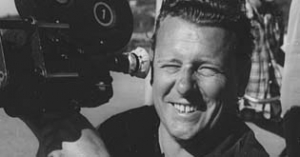 Helmut Fischer-Ashley was born September 17, 1919, in Vienna. While still attending secondary school, he first came into contact with the visual media when he started working as an assistant to the fashion photographer Kitty Hoffmann. From 1934 until 1938, he was trained as a photographer at the Vienna School of Graphics. Subsequently, he worked as a portrait photographer in Berlin. In 1939, he was called up by the military, where he was trained as an aerial photographer. After he had joined the German military campaign in France, he stayed at a unit in France and opened a cinema in the Normandy.

In 1941, Ashley got trained as a war correspondent in Berlin – the start of a fast-paced career as war correspondent and cameraman at the German Ministry for Public Enlightenment and Propaganda. He flew countless sorties, shot footage for the documentary "Luftwaffe Westen", and was promoted lieutenant. At the end of 1942, his military career ended due to a politically motivated denunciation of his father. Helmut Ashley was discharged from the military as "politically untrustworthy".

Until the beginning of 1945, Ashley hired out as a camera assistant at the Berlin Film Company, where he worked on popular movies such as "Die Zaubergeige". A case of paralysis caused by diphtheria forced Ashley to quit this job and return to Vienna. After the end of World War II, he worked as a print journalist for Paul Hörbiger's newspaper "Neues Österreich", and eventually as a reporter for the British-American "Wochenschau" newsreel.

Towards the end of the 1940s, he resumed work as a camera operator. In 1950, he returned to Germany, where he worked as chief cameraman for directors such as Helmut Käutner, Georg Tressler, Rudolf Jugert, and Alfred Weidenmann. Over the years, he became one of Germany's most sought-after and highest paid cameramen. However, Ashley did not take every job he was offered. He refused to work on shallow comedies and specialized in movies depicting rather serious issues.

In 1960, Helmut Ashley made his debut as a director: Heinz Rühmann, whom he had met during the shooting of Robert Siodmak's "Mein Schulfreund" ("My School Chum"), engaged him to direct the crime movie "Das schwarze Schaf" ("The Black Sheep"). Even though the film became a huge hit at the box office, Ashley worked almost solely for the television during the following decades, mainly for the TV station ZDF. Until 2005, he directed several episodes of the crime series "Der Alte" ("The Old Fox") and "Derrick", as well as TV movies such as "Nachtzug D 106" and "Tamara Bunke".