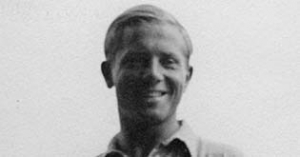 Carl Balhaus, born November 4, 1905, in Mülheim an der Ruhr, studied German studies and philology, but already took actor's training with Professor Georgi at Deutsches Theater during his time at university. After several performances at Deutsches Theater, Erwin Piscator made him a cast member of Volksbühne in 1926, where Balhaus stayed until 1935. During this time, Balhaus worked with some of the most important artists of the German theatre scene, including directors such as Max Reinhardt and Gustaf Gründgens, and authors such as Klaus Mann.

In 1926, Balhaus made his movie debut in a small role in the silent film "Ramper der Tiermensch". In the following years, he starred in succinct supporting roles in films such as "Der blaue Engel" ("The Blue Angel", 1929/30), directed by Josef von Sternberg and Harry Piel's "Schatten der Unterwelt" (1931). But because of his political activities as a member of the revolutionary union opposition Balhaus was banned from work in film or theatre productions after the Nazis took to power in 1933. It was not until 1935 that Balhaus got smaller engagements at Berlin theatres. Until 1939, he then worked as an actor at Munich's Residenztheater. There, he also directed his first play, Max Dreyer's "Kriegsgericht". Beyond that, Balhaus was only rarely seen in movie productions during the period of the Third Reich.

After the end of World War II, Balhaus worked as a director for Münchner Rundfunk, and from 1946 to 1949 as a guest director at theatres in Düsseldorf, Heidelberg, and Dresden, among others. In 1950, he became the head director of Staatsschauspiel in 1950. Three years later, he went to Potsdam to work as the assistant of Martin Hellberg for the DEFA film "Der Ochse von Kulm", his first experience with film directing. After acting as the assistant director to Harald Mannl for the propangandistic DEFA production "Der Fall Dr. Wagner" in 1954, Balhaus made his debut as a film director in 1956 with the drama "Der Teufelskreis" about the Reichstag fire in Berlin in 1933. Although the film was criticized for its conservative direction, it was nevertheless praised for its accounting of German history. Until today, "Der Teufelskreis" is the best-known film of the small works of films directed by Balhaus. After a series of unfortunate film projects, Balhaus returned to the theatre in the 1960s. From 1964 to 1968, he was the artistic director of the Landestheater in Eisenach.

On Juli 28, 1968, Balhaus died from the injuries sustained in a car accident.