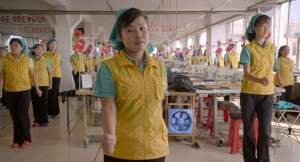 For her documentary, filmmaker Sung-Hyung Cho, a native of South Korea, traveled to North Korea. Her objective: A cinematic portrait of life in a country that is ruled by a seemingly mad dictator and about which we know next to nothing because it almost completely seals itself off from the rest of the world. Sung-Hyung Cho meets various citizens who – needless to say - have been selected by representatives of the regime, including soldiers, farmers, painters or seamstresses. In addition, a "watchdog" of the government is present throughout most of the shooting. Correspondingly, the statements of the interlocutors about their homeland and their government are unanimously positive. Yet every now and then Cho manages to break through the facade of propaganda and memorized praise, to catch glimpses of the "real life" in North Korea.