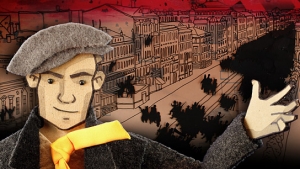 An animated account of the October Revolution of 1917, told from the different perspectives of Russian artists, authors and intellectuals. While many welcome the end of the Czar's regime, they are also critical of the revolution's outcome. For example, writer Maxim Gorki and painter Alexander Benois fear that the Bolshevik rule will limit the freedom of art. Meanwhile, young poet Wladimir Majakowski deliberately seeks confrontations with established artists. Avant-garde painter Kasimir Malewitsch publishes a series of manifestos on art and politics, while poet Sinaida Hippius's political ties give her rare insight into the programmatic plans of the powers that be.