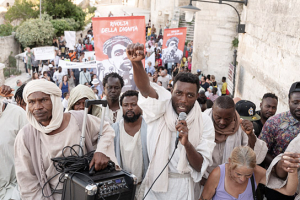 How would Jesus position himself in modern times on the refugee policy of Europe and Italy in particular? What would he preach in the 21st century? Who would his disciples be? Who are the displaced and outcasts in today's world order? And how would today's representatives of secular and spiritual power react to him? The film and theater maker Milo Rau addresses all these questions in the context of an extraordinary artistic-political experiment: in the southern Italian town of Matera, he staged a Passion Play centered on refugees from Africa who are exploited in Italy for starvation wages as harvest workers. In addition, activists and citizens of Matera participated; other roles were played by actors Marcello Fonte and Enrique Irazoqui (portraying Jesus in Pier Paolo Pasolini's "The Gospel According to St. Matthew"), actress Maia Morgenstern (Mary in Mel Gibson's "The Passion of the Christ"), and songwriter Vinicio Capossela.