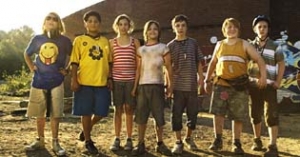 New film version of the youth novel of the same name, that had been adapted for the first time for the TV in 1977 to an enormous success. The story is centered on a gang of children called "Vorstadtkrokodile". To finally get accepted to this cool gang, ten-year old Hannes takes a risky test of courage. During the test, Hannes is exposed to life-threatening danger. But then, Kai who is the same age saves him. Kai would also like to join the gang but he is bullied by the other children as a supposedly helpless "retard" because he is paralyzed. The gang is not interested in him until Kai one night observes a group of burglars. After all, it would be a great coup if they would succeed to help arrest the felons. On condition that he is allowed in on the gang’s investigation, Kai leads the other boys onto the track of the burglars - an adventure that soon turns out to be really dangerous.