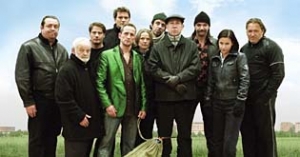 The title of this trickster comedy alludes to the Hollywood blockbuster "Ocean′s Eleven". Shortly after his release from prison, small-time criminal Oswald Schneider already plans his next coup – he wants to raid an iron foundry where hundreds of thousands of old Deutschmark coins are set to be destroyed. Later, he wants to convert the loot into Euros. But Ossi is not able to pull this off on his own, thus he takes his old "fellows" aboard because everyone contributes a special competence. There is only one problem: Ossi′s brilliant plan has made its rounds on the scene. And before he knows it, Ossi has to handle a whole gang of other crooks who also want to be admitted in his "team".