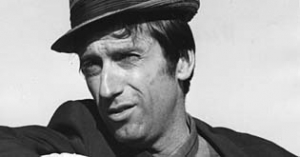 Herbert Fux was born March 25, 1927, in Hallein, Austria. The family moved to Salzburg, where he obtained his university-entrance diploma in 1944 and studied acting at the Mozarteum University. Before he started his movie career, Fux spent several years as a stage actor in Salzburg and Vienna. He gained quick popularity as a screen actor, not least because of his striking appearance: with his lean body and distinctive facial features the actor was destined to play clowns and villains. In the 1960s and the 1970s, Fux could be seen in several genre movies ranging from slapstick comedies and spaghetti westerns to Edgar Wallace movies ("Der Gorilla von Soho" / "Gorilla Gang") and B-horror movies such as "Hexen bis aufs Blut gequält" ("Mark of the Devil") and "Jack the Ripper – Der Dirnenmörder von London" ("Jack the Ripper").

At the same time, the versatile character actor turned towards the more sophisticated auteur cinema. In 1967, Flux was awarded the German Film Award for his part in "Wilder Reiter GmbH" ("Wild Rider Ltd."). In later years, he worked with directors such as Volker Schlöndorff ("Die verlorene Ehre der Katharina Blum" / "The Lost Honor of Katharina Blum") and Werner Herzog ("Woyzeck").

Television became an increasingly important part of his career. His TV credits include successful crime series such as "Der Kommissar" and "Der Alte", in which he was usually cast as both charismatic and shady characters. Throughout the 1970s and the 1980s, Herbert Fux was among the best-known faces in popular German TV productions.

Since the early 1970s, Herbert Fux became involved in Austrian politics and worked as a councilman for the city of Salzburg. In the 1980s, he won a seat in Vienna's parliament for the Austrian Green Party, of which he was a founding member. Later on, however, Fux abandoned his mandate and devoted himself increasingly to artistic activities. His last big screen movies include the expensive comic adaptation "Asterix & Obelix gegen Cäsar" ("Asterix & Obelix vs. Caesar") and "Silentium", an adaptation of a novel by Wolf Haas.

After a long sickness, Herbert Fux died on March 13, 2007, in Zurich, only a few days before his 80th birthday.