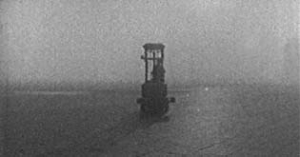 Media scholar Klaus Kreimeier has called Harun Farocki′s short film "the most important agitprop film of the anti-Vietnam War movement": The film shows an empty table with Harun Farocki putting forward the account of an US attack against a Vietnamese village and of the deployment of Napalm.
The film answers the question of how to show the deployment of Napalm to the audience and how to create an image of the injuries caused by Napalm by Harun Farocki putting out a burning cigarette on the back of his hand – together with the reference that a cigarette burns with 500 degrees Celsius, while Napalm burns with 4000 degrees Celsius.