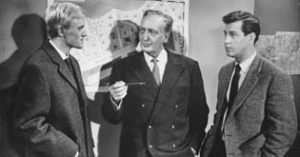 
Nearly 30 years after the first "Greifer" movie, Hans Albers again played the police inspector who is dreaded by the gangland, but this time as an aging hero: German chief superintendent Dennert is working on a case when he reaches retirement. His son Harry, who is also a police inspector, takes over the case but does not make any progress. Then Dennert proves that he is still on top of his game: He investigates on his own account, with his proven methods and with the help of several crooks until he finally seizes the women’s killer.