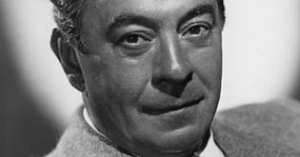 Géza von Bolváry-Zahn was born December 27, 1897, in Budapest as the son of an Hungarian industrialist and landholder. After graduating from school, he attended the Imperial Military Academy in Budapest. At the age of 17, he joined the Hungarian army and fought in World War I (Honved Hussars). After the war, he earned his living as a freelance journalist.

From 1919, he worked at the Star-Film company in Budapest, where he was initially hired as an extra and went on to become an actor and assistant director. In 1920, he made his debut as a director with "Ketarcu Asszony", starring Ilona Mattyasovszky, whom he married in 1923. Mattyasovszky later changed her name to Helene von Bolváry. In 1921, the couple founded a school for theater and film. One year later, however, they left Hungary for Vienna due to difficult working conditions in the crisis-ridden movie industry. Later on they moved to Munich.

Starting with his first German film "Mutterherz" (1923), Bolváry directed a total of 35 German and international movies until 1933, including "Der fesche Husar" ("The Bold Dragoon", 1928). Most of his movies were lightweight comedies featuring soon-to-be stars like Zarah Leander, Hilde Krahl, and Ilse Werner.

After rejecting an offer by the U.S. film company MGM, Bolváry continued to work in France, Austria, and Germany. In 1934, he represented his home country Hungary at the Venice Biennale with "Tavaszi Parade". During World War II, he continued to shoot innocuous entertainment films.

In 1948, Bolváry obtained the Austrian citizenship and got married for the second time. From 1947 until 1949, he worked at the Roman production company Cinopera. From 1950 until 1953, he earned his living as a freelance director, until he got an employment at the Starfilm company in Munich in 1954. In 1959, he celebrated a big success at the Vienna Volksoper with his first theater production "Gräfin Mariza".

Géza von Bolváry-Zahn died on August 10, 1961, in Altenbeuern near Rosenheim.