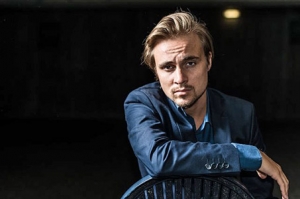 Constantin von Jascheroff, born March 5, 1986, is the son of actors Mario and Juana-Maria von Jascheroff. He made his debut at age eleven in "Rennschwein Rudi Rüssel" ("Rudy the Racing Pig"). One year later, he played his first leading part in the RTL TV series "Titus, der Satansbraten". Furthermore, he appeared in various TV productions like "E-M@il an Gott" ("God@heaven.com") and "Sperling und der Mann im Abseits", as well as in comedy shows like "Anke" or "Die Boegers".

Jascheroff is the German dubbing voice of young Anakin Skywalker in "Star Wars". In 2003, he played his first leading part in a feature film in the highly praised adolescence drama "Jargo". His performance in Christoph Hochhäusler's "Falscher Bekenner" ("Low Profile") won him the award of "Best Leading Actor" at the Munich Film Festival 2005 and the Türkei/Deutschland Film Festival 2006 in Nuremberg.

After a key supporting role in the multi-cultural comedy "Leroy" (2007), Jascheroff was highly praised for his performance in the low-key tragicomic coming-of-age story "Jagdhunde" ("Hounds", 2007). Besides his performances on the movie screen, Constantin von Jascheroff also appeared in TV productions, for instance, in TV series like "Küstenwache", "SOKO Köln" or "Tatort", or in TV movies like "Küss mich, Genosse!" (2007) or "Barfuß bis zum Hals" (2009), alongside Christoph M.Ohrt.

In 2009/2010, Constantin von Jascheroff starred in two feature films that received much attention as well as a number of awards: In "Parkour" (2009), he is the good friend of an increasingly self-destructive parkour runner and in "Picco" (2010), a film controversial because of the intense depiction of violence, he plays a young prisoner, who participates in the torturing and killing of a cellmate.

In the following years, Jascheroff appeared in a number of TV productions, e.g. as one of the main characters in the Spanish TV series "Las aventuras del capitán Alatriste" (ES 2015). The comedy "Systemfehler – Wenn Inge tanzt" (2013) marked his return to the big screen and saw him in the role of a jealous school band guitarist. In 2015, he played a small part in the drama "8 Sekunden - Ein Augenblick Unendlichkeit" ("8 seconds"). A year later, the experimental drama "Continuity" about a couple that is looking for a "replacement" for their son, who was supposedly killed in the war, premiered at the Forum Expanded section of the Berlinale.

In addition to his work in front of the camera, Constantin von Jascheroff has continuously been working as voice actor, for example for the animation films "Der kleine Rabe Socke" ("Raven the Little Rascal", 2012) and "Die Biene Maja - Der Kinofilm" ("Maya the Bee Movie", 2014). Also, he is the German voice of Kieran Culkin ("Margaret", US 2011) und Anton Yelchin ("Star Trek: Beyound", US 2016).