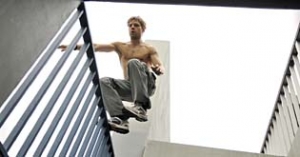 The art of the extreme sport parkour is to acquire the intellectual and physical prerequisites in order to overcome all obstacles efficiently and safely that stand in the way. The scaffolder Richie is a natural talent at running the parkour, but also unequalled in his talent for putting obstacles in his own way.

Richie unwinds from his strenuous job with his best pals Nonne and Paule by practicing their mutual passion: parkour. Richie’s other passion is his pretty girlfriend Hannah, whom he loves to death. She is trying a second time around to get her high school diploma and is in a dither trying to prepare for her final maths exam. Since she’s completely out of her depth, Richie offers to ask his best mate Nonne to help her because he was a whiz at maths in school. But the more time she spends with Nonne, the more troubled Richie becomes. His friend Janko, who has a problem with women, warns him to keep an eye on Hannah when Nonne is coaching her, because after all, all women are the same.

Stressed out because his boss doesn’t pay his wages, Richie is borne down more and more by delusions of jealousy. He gets into a fight at the disco and causes a serious accident at the construction site. Like in a never-ending nightmare he dashes from one uncontrollable situation to the next, and it seems like everybody and everything is conspiring against him. The noose around Richie’s neck is getting tighter and tighter.