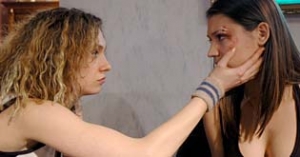 Princess
It′s between Christmas and New Year′s Eve in a typical West German suburb: Christmas lights still adorn the dull apartment blocks, cheap motels and discount markets as premature fireworks echo throughout this industrial wasteland. Eighteen-year-old Katharina, who has re-settled from Russia to Germany, spends her time with Yvonne and the rest of the gang. Katharina and the other girls – desperate Yvonne, freaky Jenny who is obsessed with all kinds of sexual perversions, and 11-year-old overly sexualized Mandy – roam around out in the cold. Tomorrow, Yvonne, the gang′s leader, has to go to prison for nearly beating a young woman to death. The friends try to make the best out of their last day together. But their efforts to have fun fail amongst their bleak surroundings.


At a police station, Katharina takes the blame for Yvonne, who has yet again beaten up another girl in a suburban train; it is her last gift to Yvonne before she has to leave them. But when Yvonne decides that she is not going to go to prison after all, things start to fall apart. Their fragile system of friendship breaks up – leaving everyone naked and wounded. Just yesterday they would stand up for each other, no matter what. When Katharina decides to try to get close again to her strict and over-protective Russian-German background, the others feel lost without her. In an absurd effort, Yvonne steals her stepfather′s gun to rob a tanning studio. Running away from the police, she falls into the arms of a rival gang and is terribly humiliated and wounded. Yvonne pulls out the revolver and shoots one of the other gang members. Katharina tries everything to save her but she cannot protect Yvonne from what she has done. Confronted by the police, Yvonne then threatens to shoot Katharina, her only friend, her love...