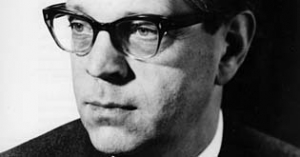 Herbert Reinecker was born December 24, 1914, in Hagen in Westphalia. After his graduation from high school, he became the editor of a Hitler Youth magazine for the region Westphalia in 1934. Shortly after, he was transferred to the public relations section of Reichsjugendführung (RJF) in Berlin. There he worked as a contributing editor of the Jungvolk magazine "Der Pimpf" at Amt für Presse und Propaganda.

From 1936 on, Reinecker published propagandistic youth books and from 1939 on also fiction books. In 1939, he also attended a screenplay writing seminar at Tobis. Together with a friend, the dramatic advisor Christian Bock, he finished the screenplay to the short comedy film "Der Mann mit dem Plan". In 1940, Reinecker became a member of Kriegsberichterkompanie at Waffen-SS and in May 1942 he took over not only the post of managing editor of "Der Pimpf" but also became the editor in chief of "Junge Welt", the nationwide magazine for the Hitler Youth.

Together with the director Alfred Weidenmann who was also a youth book writer and a member of RJF, Reinecker wrote the screenplay to "Junge Adler" ("Young Eagles"). The film tells the story of the work effort of a group of trainees in an aircraft works. Furthermore, the film was one of the most important Nazi propaganda films about the sacrificial spirit of German youth. Entrusted with propaganda work for the SS division Hitler Youth that was set up in May 1943, Reinecker accompanied their first mission in June 1944 during the invasion of the Allied forces.

After the war, Reinecker at first lived without employment in Hamburg, Halver, and in Hannover where he wrote some texts for Kabarett Eulenspiegel in 1947. In 1948, he moved to Landstuhl in Rhineland-Palatinate where he operated "Die Kurzgeschichte", his press service for arts and culture. He used several pen names for the stories of his service.

In 1951, he returned to Hamburg where he wrote radio plays for NWDR. Together with Alfred Weidenmann he also finished an award-winning short film about the youth detention center on the island of Hanöversand: "Weg in die Freiheit".

In 1953, Reinecker published the novel "Kinder, Mütter und ein General" ("Children, Mother, and the General"). The story about ensnared children who want to bring to pass the final victory at the Eastern Front was turned into a film version by producer Erich Pommer and director Laszlo Benedek. Reinecker also won the German Film Award for his screenplay to "Canaris".

During the following years, Reinecker wrote several screenplays for films about the Third Reich and especially about Wehrmacht. He also wrote the screenplay to the thriller "Menschen im Netz" ("Unwilling Agent") that warned about spies from Eastern Europe before he turned to writing screenplays for film versions of literary classics such as "Schachnovelle" or "Schloss Gripsholm" ("The Gripshom Castle"). During the mid-1960s, he also wrote screenplays under the pen name "Axel Berg" for adventure films, films of the Edgar Wallace crime film series, or films about the FBI agent Jerry Cotton.


In 1963, Reinecker started to collaborate with the Munich-based TV producer Helmut Ringelmann with an episode of the spy series "Die 5. Kolonne". From 1968 on, after the three-part crime films "Der Tod läuft hinterher" and "Babeck", Reinecker wrote the screenplays to the TV crime series "Der Kommissar", starring Erik Ode in the title role, that became a long-running success not only in Germany but also internationally. In 1973, Reinecker developed the legendary crime series "Derrick", starring Horst Tappert in the title role. The series ran until 1998 and is still considered to be the prototypical German TV crime film series in numerous countries.

At the same time, Reinecker provided ZDF with TV movies, episodic films, and special programs. The idyllic films about the pensioners "Jakob und Adele" and the cruise ship series "Das Traumschiff" turned out to be particularly successful.

Herbert Reinecker died on January 27, 2007, at the age of 92 years old in Berg at Lake Starnberg where he had been living with his second wife since 1964.