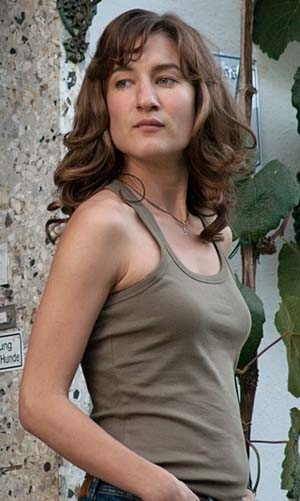 Marie Leuenberger, born in 1980, gained first experience in acting when she was 16 years old, performing in various stage plays at Junges Theater Basel until 1999. From 1999 to 2002, she studied acting at Munich's Otto-Falckenberg-Schule. In the 2002/03 season, she had an engagement at Bayerisches Staatsschauspiel in Munich, and then moved on to an engagement at Staatstheater Stuttgart. In 2005, she became a member of the ensemble at Deutsches Schauspielhaus in Hamburg, where she stayed for five years. During that time, she received the young talent sponsorship award granted by the Freunde des Deutschen Schauspielhauses.

Her debut as a film actress had already been in 2003, when she featured in Tim Fehlbaum's short "Für Julian". However, her first appearance in a feature film was not until 2009, when she starred in the Swiss comedy "Die Standesbeamtin" ("Will You Marry Us?"). For this role, she was awarded both the Swiss Film Prize and the award for best actress at Montréal's World Film Festival.

In 2010, she played the lead in the Swiss TV comedy "Verstrickt und zugenäht", a film about four women trying to save a sock factory, and starred in the TV drama "Vater, unser Wille geschehe", about a family who have to decide whether to continue life-prolonging measures on the father who is in a coma. On the big screen, she featured in Christian Zübert's "Dreiviertelmond" (2011), as the alienated daughter of an embittered cab driver (Elmar Wepper), in the comedy "Was weg is, is weg" (2012), as the new love of a young Bavarian who is trying to escape life in the village, and finally in Marcus H. Rosenmüller's comedy "Wer's glaubt, wird selig" which was released in German movie theatres in the summer of 2012. Leuenberger plays a woman from a Bavarian ski village whose late mother is to be canonized in order to attract pilgrim tourists.

She had a somewhat more serious role alongside Maria Schrader and Ursula Werner in the cheerful and contemplative feature film "Schwestern" ("Sisters", 2013), as the youngest daughter of a secular family who wants to enter a convent. She received the Swiss Television Film Award at the 2013 Solothurn Film Festival for her potrayal of a mysterious young actress in the Swiss TV thriller "Hunkeler und die Augen des Ödipus." The German TV thriller "Neben der Spur - Adrenalin" (2014), the first film of a new series, featured her as a young police detective. Leuenberger also played this leading role in the series' further episodes until 2021.

On the big screen, Leuenberger was part of the ensemble of the drama "Amnesia" (CH/FR 2015), starring Marthe Keller, Max Riemelt and Bruno Ganz. Very different was the absurd comedy "Schubert in Love - Vater werden ist (nicht) schwer" (2016), about the hair-raising attempts of a socially incompetent know-it-all to find a woman for life.

The leading role of a young housewife and mother living in the village with her husband and sons, who in 1971 in Switzerland begins to publicly and fiercely campaign for women's suffrage against the resistance of male voters, was played by Marie Leuenberger in "Die göttliche Ordnung" ("The Divine Order", CH). The film was released in 2017 and selected as the Swiss entry for Best Foreign Language Film at the 90th Academy Awards, but was ultimately not nominated. The drama did receive several other awards at international film festivals, and won in the categories of Best Actress in a Leading Role (Marie Leuenberger), Best Supporting Actress (Rachel Braunschweig) and Best Screenplay (Petra Volpe) at the 2017 Swiss Film Awards, where it was nominated in four further categories, including Best Film.

In the competition section at the 67th Berlinale, Thomas Arslan's father-son drama "Helle Nächte," premiered in 2017, with Leuenberger playing the partner of Georg Friedrich's main character, who follows a job offer to Washington, D.C..

After guest roles in Dresden's "Tatort" (TV, 2017) as well as in the crime series "Marie Brand" (TV, 2018), Leuenberger was seen on the big screen again in Marcus H. Rosenmüller's family comedy "Unheimlich perfekte Freunde" ("Double Trouble and the Magical Mirror") in 2019, as the mother of one of the young main characters. This was followed by further (supporting) roles in TV productions, including as the sister of a midlife crisis-stricken crooner (Pasquale Aleardi) in the ARD production "Bingo im Kopf," in the Donna Leon crime thriller "Stille Wasser" (both 2019), in the X Filme Creative Pool-produced for ZDF, six-part German miniseries "Die verlorene Tochter" (2020), as well as in two films from the series "Ein Krimi aus Passau," launched in 2020, in which she starred alongside Michael Ostrowski as a policewoman from Berlin who begins a new life in Passau with her adopted daughter under a new identity and under the care of witness protection. Further films in the series are in preparation.

Directed by Swiss Oliver Rihs, she starred in the drama "Bis wir tot sind oder frei" ("Caged Birds"), based on true events, as the lawyer of escapee Walter Stürm, who uses his popularity to highlight the injustices of the Swiss penal system in the 1980s. Leuenberger won Best Actress awards at both the Avanca Film Festival in Portugal and the Black Nights Film Festival in Tallinn, Estonia for her performance in the film, which premiered at Filmfest Hamburg back in 2020 and was not released in German cinemas until March 2022 due to the pandemic.