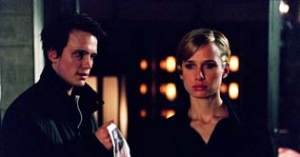 In the basement of an unfinished building, bright spotlights and electrifying pills transport the young guests into another world. Marc, freshly graduated from the police academy, is among those who enjoy music and drugs - until police detective Minks and his people raid the place. Marc can escape, but his jacket is found. The pills he hid in it provide an opportunity for Minks, and his young colleague will face a tough decision: Marc will either work for Minks in homicide, or his career will be finished on drug possession charges. But why would this cynical detective, generally feared for his unconventional methods, want Marc at his side?

Soon it becomes clear what Minks is expecting from the cooperation with his party-wise fellow detective. He wants to gain access to a world that is closed to him, a world which swallowed up his daughter Marie two years ago. Marc′s investigation leads him to the burnt corpse of a young woman, and several other leads direct him to a series of other murder cases, which all have one thing in common: the perpetrator seems to dissect his victims with a scalpel, as all of them are missing large pieces of skin. During his investigation, Marc comes across Maya, the beautiful, if very cool, girlfriend of one of the victims. She too will be sucked into the maelstrom of this case, from which there seems to be no escape ...