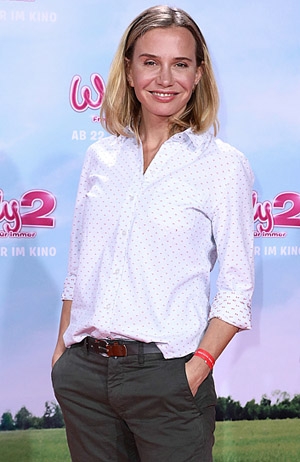 Nadeshda Brennicke at the premiere of "Wendy 2 - Freundschaft für immer" in Cologne on February 4, 2018

Nadeshda Brennicke was born on the 21st of April, 1973 in the city of Freiburg. From 1989 to 1991, she attended the Zinner Acting School in Munich, was then discovered by Sönke Wortmann and made her film debut in the comedy "Manta – Der Film". Playing supporting roles in the television series "Anwalt Abel" and in such films as "Workaholic" and also a main role in Christian Petzold's first feature film "Pilotinnen", she achieved her breakthrough in 1998 as the police woman in the TV-series "Straßen von Berlin". In 2000, she received the Adolf Grimme Public Award for her performance in the TV-drama "Das Phantom".

For two roles in the demanding television productions Dominik Graf's "Hotte im Paradies" and the episode "Silikon Walli" of the series "Polizeiruf 110", Brennicke was nominated for German Television Award. In the last few years she played in such different films as the swindler comedy "Kanak Attak", Robert Schwentke's dark thriller "Tattoo" and the comedies "Basta - Rotwein oder Totsein" and "Die Bluthochzeit". In Andreas Morell's episodic drama "Unschuld" (2008), Brennicke plays a police woman. The same year she joined the cast of the crime drama "Darum", playing the wife of an unassuming man who suddenly becomes a murderer.