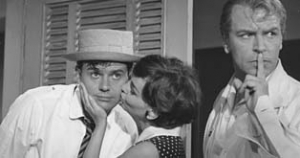 Post-war version of the adventure story that had already been filmed several times before. O.W. Fischer stars in the leading role as Peter Voss, alongside Walter Giller as Bobby Dodd. Gentleman and jack of all trades Peter Voss is offering his support when banker Rottmann gets into financial trouble. He fakes a theft allegedly worth several millions but then he comes up against the real thieves and has to flee around the world while he is chased by the thugs, the police, and also private investigator Bobby Dodd. But Voss proves himself to be resourceful and adventurous enough to play a trick on his persecutors.