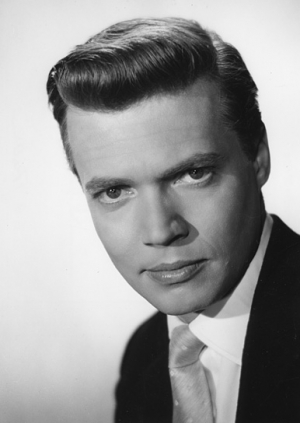 Karlheinz Böhm was born March 16, 1928, in Darmstadt, to conductor Karl Böhm (1894-1981) and his wife Thea Linhart, a soprano singer, and grew up in Hamburg and Dresden. In 1942, he left Germany for Switzerland before moving with his parents to Graz in 1945. Böhm, a student of German and English literature, worked as an assistant director for Karl Hartl in Vienna. Later Böhm attended actor's training at Burgtheater and subsequently became a member of the Burgtheater ensemble. From 1949 to 1953 he worked at Theater in der Josefstadt. In 1952, Hartl brought him to Munich for the movie production of "Haus des Lebens" (House of Life). Böhm enjoyed his first success with the role of an amorous student in Artur Maria Rabenalt's "Alraune" ("Unnatural").

In the following years, Böhm appeared in more than 30 films, most often as a sincere and respectable young man. His performance as Emperor Franz Joseph in Ernst Marischka's "Sissi" trilogy, in particular, formed the image of the young hero of integrity. Böhm and Romy Schneider were the perfect couple of the German cinema and Böhm, at the same time, became the male role model of the 1950s.

At the end of the 1950s, Böhm tried to change his role image. He appeared in several British, French and American films eager to play more complex characters. In 1959, he played the role of a psychopathic voyeur in Michael Powell's thriller "Peeping Tom". Although the movie received slating reviews by critics in Great Britain and Germany alike, it was re-examined 20 years later and is nowadays considered as a masterpiece. In the mid-1960s Böhm moved to Corregia near Lugano and focussed more on his theatre work again. In 1964, he made his debut as a director with "Elektra" at Staatsoper Stuttgart which was followed by several opera productions.

From 1970 on, Böhm began to work regularly for TV productions and, for example, presented a TV series on Ludwig van Beethoven. During this time he also worked intensively with Rainer Werner Fassbinder: He played the sadistic husband in Fassbinder's "Martha" (1973) and a gay art dealer in "Faustrecht der Freiheit" ("Fist-Fight of Freedom", 1974), a variation on the story of Franz Biberkopf.

Later, Böhm was mainly to be seen on stage or in TV productions, for example in the late-afternoon TV series "Ringstrassenpalais" (1980). On May 16, 1981, Karlheinz Böhm called on the audience of the ZDF show "Wetten, dass…?" to donate money to fight the famine in the Sahel. Since then, Böhm and his foundation "Menschen für Menschen" were involved in Ethiopia, where Böhm spent most of his time.