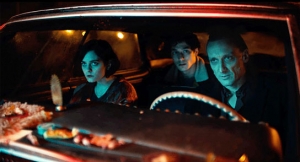 Marko Mandić was born on 8 June 1974 in Slovenj Gradec, Slovenia (then: Socialist Federal Republic of Yugoslavia). From 1993 to 1998 he studied acting at the Academy for Theatre, Radio, Film and Television (AGRFT) in Ljubljana (Slovenia); during that time he also attended the Lee Strasberg Theatre Institute in New York City in 1997. After graduating, he became a member of the Slovenian National Theatre Drama (SNG Drama) ensemble in Ljubljana in 1998. There he performed in a variety of classical and modern plays until 2010. He received the Slovenian Borštnik Prize for Best Theatre Actor of the Year four times: the first time in 2002 for his roles in Thomas Vinterberg's "Festen" and Sarah Kane's "Cleansed"; in 2007 for Ivan Cankar's "Romantic Souls" and his Polybos in Ivo Svetina's "Oedipus in Corinth", in 2008 for his Count vom Strahl in "Katie of Heilbronn" and in 2009 for the title role of "Macbeth" after Heiner Müller. He also received the prestigious Prešeren Foundation Prize in 2009. In the same year, Mandić appeared in the solo performance "Viva Mandić", in which his professional advancement was presented in video installations.

Parallel to his stage work, Mandić also began working as a cinema and television actor in the mid-1990s, initially mostly in small roles. He had his first leading role as the leader of a gang in "Barabe!" ("Rascals!", SI 2001). During the Berlinale 2007 he was honoured by the European Film Promotion (EFP) as a Slovenian 'European Shooting Star'.

In 2010, Marko Mandić featured in two German TV productions: as an unscrupulous thug in Dror Zahavi's "Zivilcourage" ("Civil Courage"), and as capo of an Eastern European Mafia clan in Dominik Graf's ten-part mini series "Im Angesicht des Verbrechens" ("In the Face of Crime"). In the competition of the Berlinale 2013 Mandić could be seen in two leading roles: Thomas Arslan's goldrush western "Gold" (2013) showed him as a horse servant who is afflicted by the consequences of a misdeed; in Stefan Westerwelle's gay relationship drama "Lose your Head" he played the mysterious acquaintance of a Spanish party tourist in Berlin.

In 2015, Mandić belonged in a smaller role to the ensemble of Philipp Kadelbach's concentration camp drama "Nackt unter Wölfen" ("Naked Among Wolves", TV); also under Kadelbach's direction he played the henchmen of a betting mafia gang in the sports betting thriller "Auf kurze Distanz" (2016, TV). Above all, however, Mandić continued to participate in Slovenian productions, for example in the leading role of the award-winning social drama "Inferno" (2014) and the award-winning mystery drama "Nocno zivljenje" ("Nightlife", 2016).

"Ende Neu", a post-apocalyptic drama with Marko Mandić as leader of a brutal horde of men, premiered at the Munich Filmfest 2018. "O Beautiful Night" celebrated its premiere in the Panorama section of the Berlinale 2019, in which he plays Death who seeks a Faustian Pact with a young man.