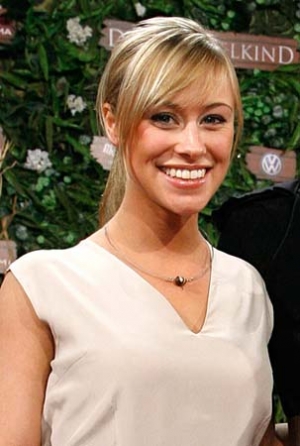 At the premiere of "Dschungelkind", February 2011 in Berlin

Sina Tkotsch was born in Berlin on June 27, 1990. As a child, she started acting by chance: At the age of nine, she was offered a leading role in the TV drama "Florian - Liebe aus ganzem Herzen" (1999). During the next years, she had supporting roles in productions like "Die Salsaprinzessin" (2001) and guest-starred in several TV series.

In 2006, Tkotsch made her feature film debut in Martin Theo Krieger's drama "Beautiful Bitch", playing the daughter of wealthy family who befriends a Bulgarian street kid. This was followed by memorable turns in "Draußen am See" ("Losing Balance", 2009), Rainer Matsutani's teen drama "Gangs" and the made-for-TV production "Sie hat es verdient" (2010, TV). She then played a girl who grows up in the jungles of West-Papua in Roland Suso Richter's adaptation of the bestselling novel "Dschungelkind" ("Jungle Child", 2011).

In the 2013 release "Ohne Gnade" ("No Mercy"), Sina Tkotsch starred as one of three attractive women who team up to take revenge on macho men. After more guest-starring roles and a memorable turn in the two-part TV movie "Die Himmelsleiter" (2015), Tkotsch had major parts in the psychological horror film "Der Nachtmahr" ("The Nightmare", 2015) and the youth drama "LenaLove" (2015).